Not a portable, sorry.

I started this one as a commission back in April, it's taken a while to get to this point. The first one had an SD card and memory card slot. I wasn't quite satisfied with the quality so I made the customer a second one free of charge with some improvements. The second one is printed in translucent plastic and has a switch to turn on some bright leds. The 3rd one (purple one) was made for my best friend to show off at his college. 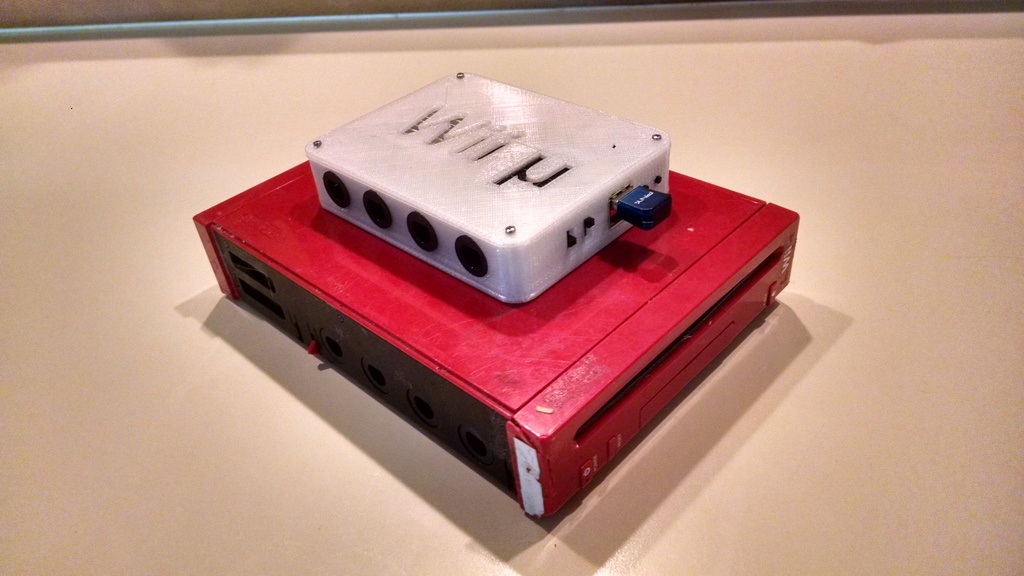 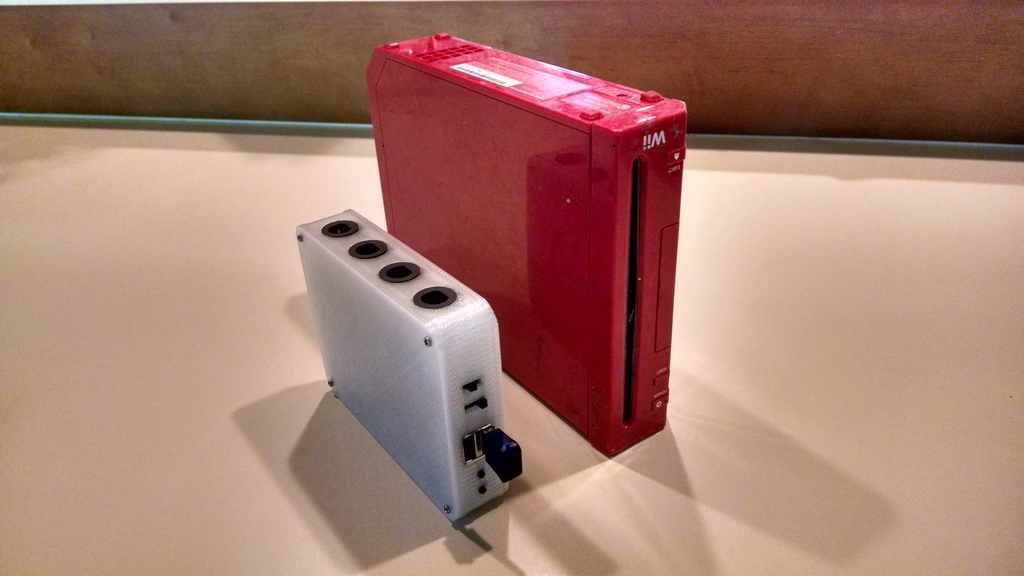 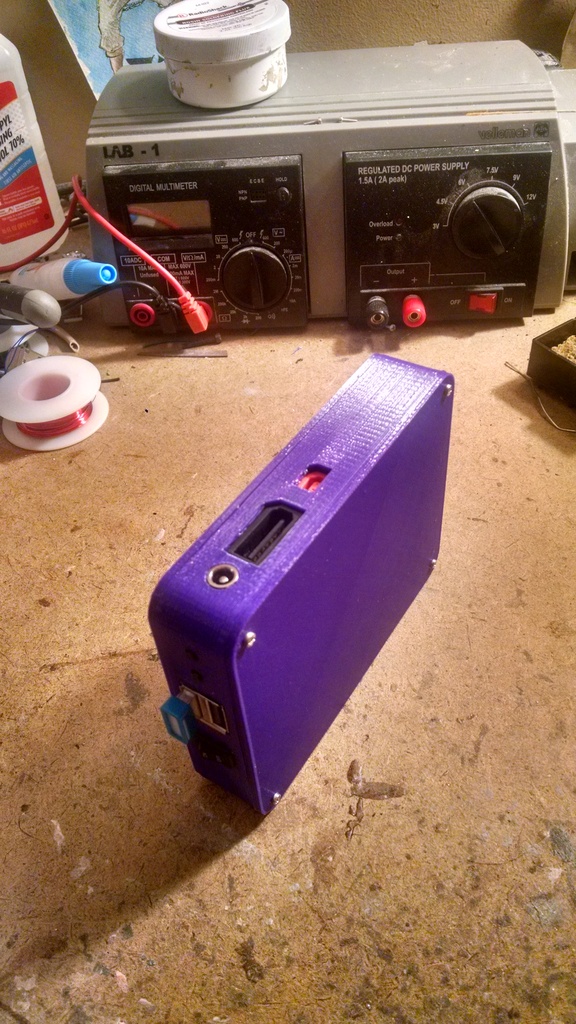 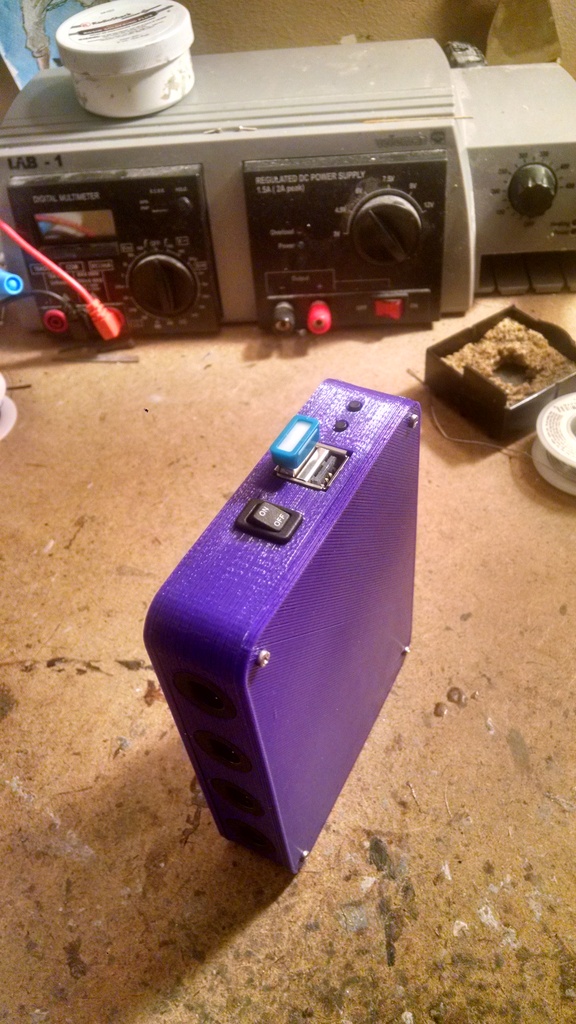 I've wanted to do this, but I don't think I could have done it that well! That is something I would definitely buy.
I have a healthy obsession with Nintendo.

These are awesome! Nice job! 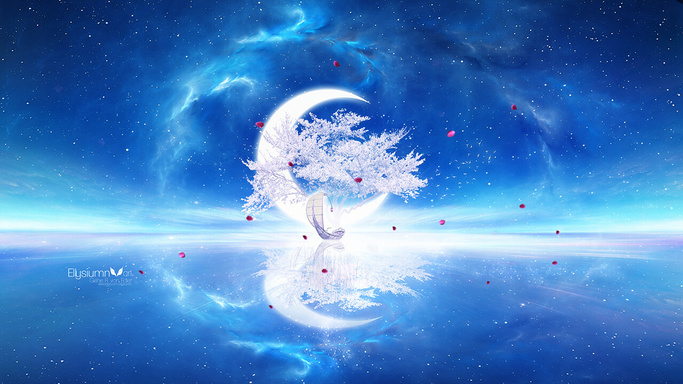 The 3D printer really did justice with these cases, amazing work as always Gman!

I think I saw the concept for this on your photobucket (I was lurking through pictures, heh)

dark_samus said:
I think I saw the concept for this on your photobucket (I was lurking through pictures, heh)
Click to expand...

LOL my photobucket has 1.3K pictures over atleast 4 years from all my projects, it's not a bad look. I know you're not the first person lmao.


Here was my first model from April 18th! It was designed while I was still away at school. Then I got a new 3D printer at the beginning of the summer, spent of a lot of time calibrating it up to full speed. Again, the case went through some minor design changes which was why it has taken me so long to finish it. 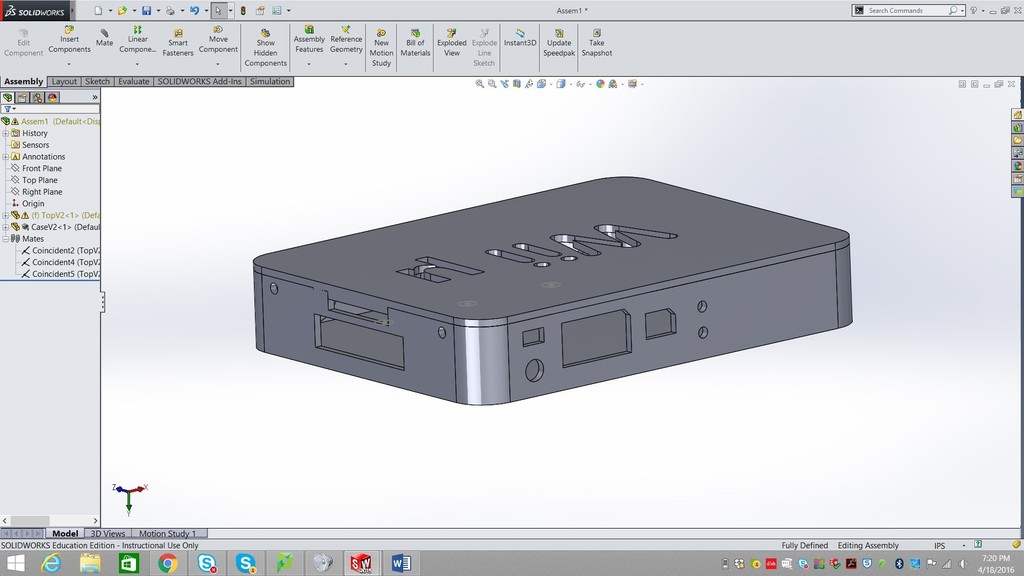 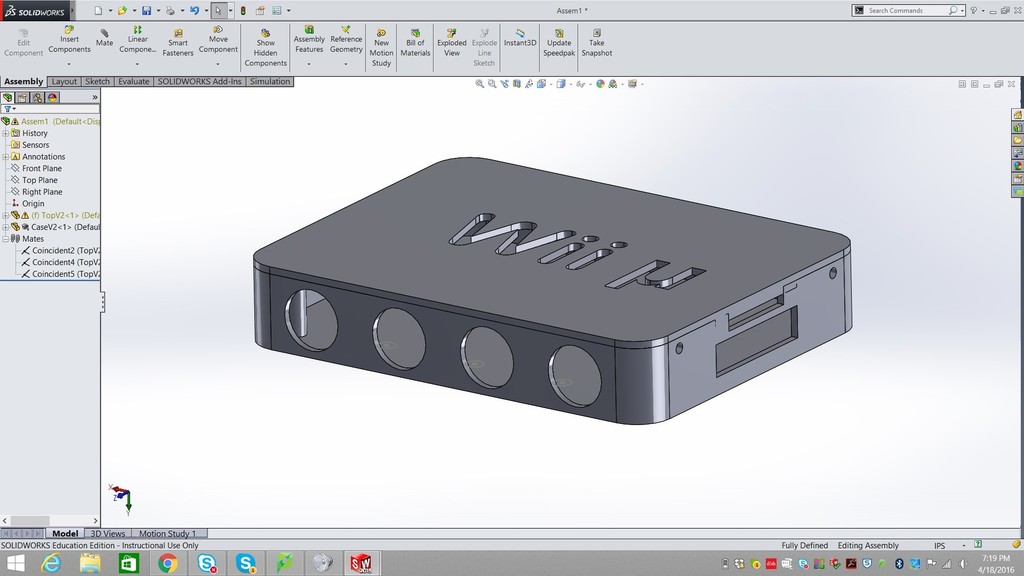 My only suggestions are countersinking the screw holes on the case and maybe putting something over the Wii text so you can't see the motherboards underneath, maybe some speaker grill mesh? Not sure if the text is part of the fan cooling.

My only suggestions are countersinking the screw holes on the case and maybe putting something over the Wii text so you can't see the motherboards underneath, maybe some speaker grill mesh? Not sure if the text is part of the fan cooling.
Click to expand...

I used the grill from a stock Wii to cover the u. The text is part of the cooling, it seemed like a good use! I designed the case to be as simple as possible. Prints in 3 parts -top, bottom, and side. 8 screws to hold it together. On the second one I changed over to M2 screws so they are quite small.

Here is the internal layout of the first one. It has gone through some slight changes so the new ones are looking nicer. I also got rid of the memory card port so there is plenty of room. 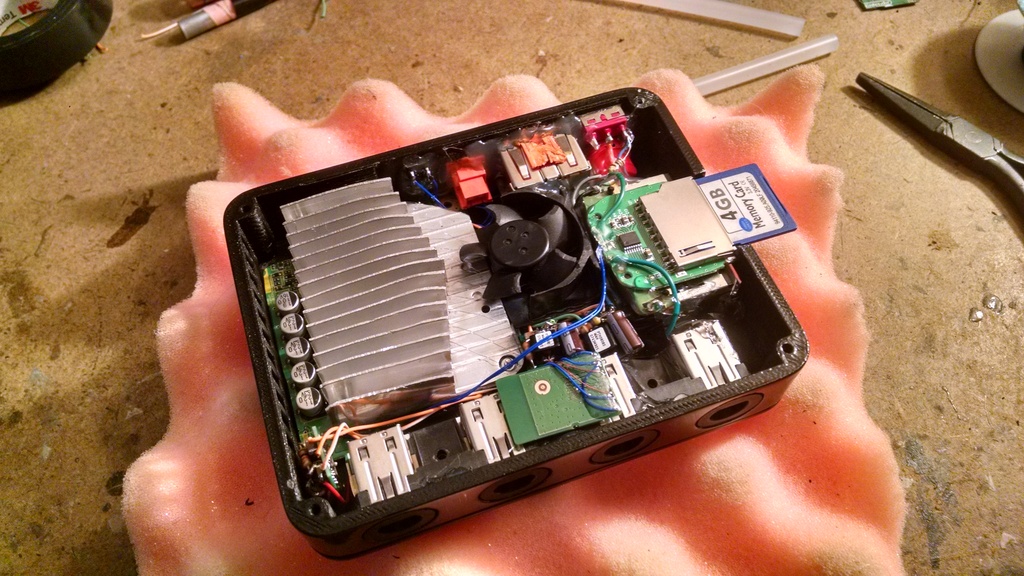 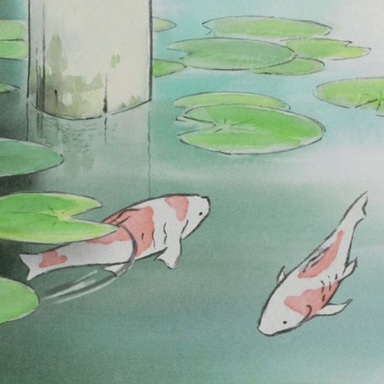 What type of plastic did you print with? Will it melt from high temperature?

martinwels said:
What type of plastic did you print with? Will it melt from high temperature?
Click to expand...

It is printed with PLA. Just like any plastic, it will melt obviously. The unit shouldn't get hotter than 100F at the hottest part, right ontop of the Ti regulators, which aren't even touching the case.

incredible, i was looking for projects like this.
can you please record a video about it.
Last edited: Sep 15, 2016

I've made significant changes to the design. Rev2!

Improvements over original design:
-Significantly less glue involved in assembly. I retained the AV and USB ports on a CPU-20 Wii so I didn't have to rewire them and more importantly, encase them in glue.
-Counter sunk screws.
-Internal screw posts for GC ports and Wii.
-No more cheapsink, uses a fan with dedicated intake hole which blows air out the side. Credit to @Shank for coming up with the heatsink design. It is both compact and easy to implement in any case.
-Went with a 6-layer Wii because there is an abundance of them on Ebay that are of no use in portables. Also, due to the orientation of the NAND, the 6-layer Wii can be trimmed shorter.
-It is a little bit bigger than the original design but the ease of assembly makes up for it.

i'm proud of u.
u really did a great job.

i was wondering if u can make new one and power it with micro USB, is it possible ? 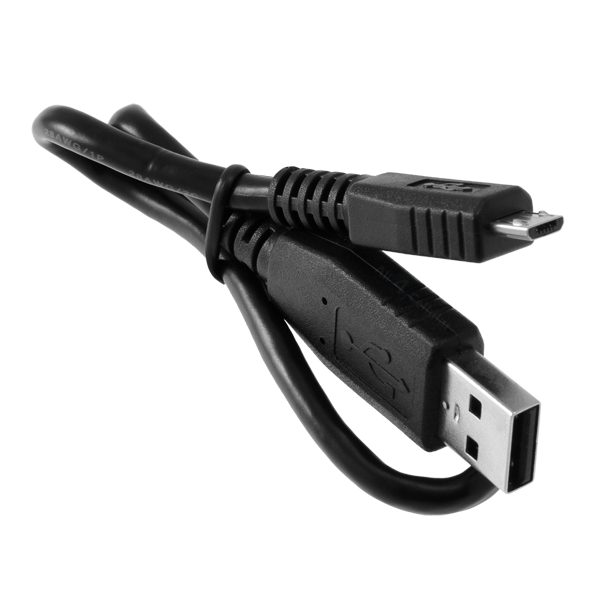 i was wondering if u can make new one and power it with micro USB, is it possible ?
Click to expand...

A Wii portable uses a little under 2 amps at 5v so yes if you had a good 5v usb source, it would work. My original plan for this was to use a 5v power supply so I didn't need a 5v regulator in there, but the sensor bar uses 12v and a pwm ground signal so I went with a 12v power supply instead to retain the sensor bar without any modifications.

You could also just power the sensor bar off of 5v over longer pwm periods (or just always on, dunno the rms of the bar power)

cheese said:
(or just always on, dunno the rms of the bar power)
Click to expand...

It depends on the sensor bar. Nintendo's older ones used more LEDs whereas the newer ones use less LEDs. A good rule of thumb (that isn't fully confirmed) is that grey sensor bars have more LEDs than black ones.

Other internet tinkerers have tried powering the sensor off USB power. The general consensus is the older ones won't work off of a 5v constant voltage source, while the newer ones will. I tried to run an older one off USB power and it did not work.
----------PiiWii Pocket-----------------Kill Mii-------

Did any wiis come with the darker sensor bar? Afaik that was only for the Wii u...
Also with the older sensor bars they may have just put in too high of a resistor to work on 5v, that sucks... Custom sensor bar will have to be the solution if you want these to be able to power off of a USB charger then...

Not sure which ones, but several of the wii's I have purchased over the past year or two (used from pawn shops) came with black sensor bars. I have quite a few of the black bars. If I had to guess, I would say they switched over with either the die shrink or the family edition, and stayed with it for the Wii U.
----------PiiWii Pocket-----------------Kill Mii-------

I wasn't frequenting BitBuilt when you started this thread, so completely missed the Wii Micro until your latest video. These are really cool and I love how they turned out! Excellent work, @Gman!
The sun is shining...

Excellent work Gman! I can't believe the Wii is finally cut down this small. I guess I've missed alot since I only just discovered this is where everbody went to from ModRetro.