I decided to start a worklog as I've been putting it off for way too long while being busy with real life (moving house, fixing house, working too much etc.).

You get the main idea from the title.

Widescreen codes have been coming out for a little while for the DC, most of the good titles have them so I thought it would be cool to have a 16:9 aspect ratio screen.

Here's a photo of the main ingredients (I have loads of other general use parts too). 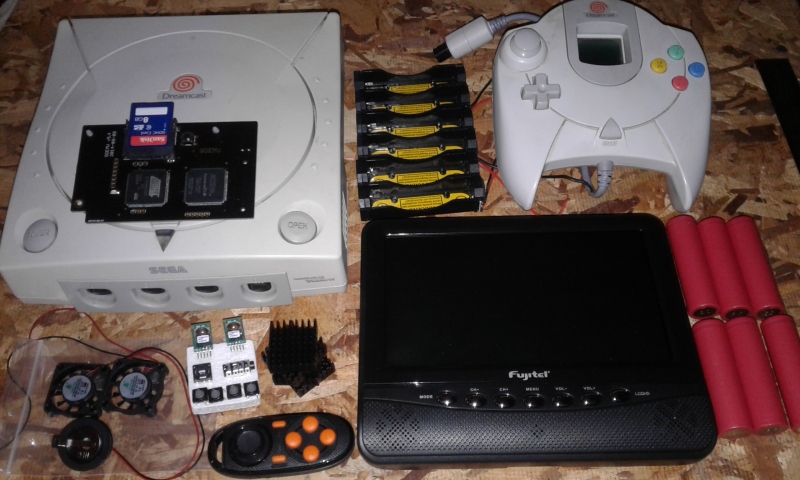 I have a GDemu, so the dreamcast runs games from SD card with 100% compatibility, doesn't use the 12v line, and loads games much quicker than stock.

The screen is 7 inches but unfortunately only accepts composite from stock. I'm planning to put either the original A/V connector or VGA out on the case. (There is an HDMI mod coning out, but it's not yet available).

For games that don't yet have widescreen codes it's still has a 5.6" visible area in 4:3 mode.

For the case I'm hoping to get it 3d printed, but I need to get designing and then fill @Panchuflenks with beer and introduce him to many women before I get to that.

Time to get soldering!

Providencial said:
...then fill @Panchuflenks with beer and introduce him to many women before I get to that.
Click to expand...

Doom said:
@ShockSlayer we have competition
Click to expand...

Maybe we do, but there's always

if things don't work out.

Anyways, there aren't enough DCp's in the world. I'm looking forward to seeing this complete!
"I've been cranking it to Marshall's work for the better part of a decade. I have no intentions of stopping anytime soon." -bud

A friend of mine is really into dreamcast, so I have read up on them a bit lately. Im looking forward to seeing this one completed!

I got hold of the GDemu by waiting for the pre-orders to open, then placing a pre-order, then when it was ready I paid and received it.

You have to check the website regularly. The last time pre-orders opened it was announced a week before.

The USB-based drive emulator may be a little easier to get hold of, but costs more.
They are both one-man-show's though, and not available from any stores.
(The USB one was available from Stone Age Gamer in the U.S. until recently, but that fell through.)

The GDemu is pretty sweet though, the only major improvement I could hope for would be integrated cheat code support to run the widescreen codes more smoothly.

The analog stick I was hoping to use is being retarded.
It's measured resistance is 4k ohms at center, 0 at minimum and 5 at maximum, and connected up the normal way I only have two of the four directions.

It's construction looks similar to the PSP ones (a bad sign!), but it's bigger, and the nub is like the 3ds sliders. 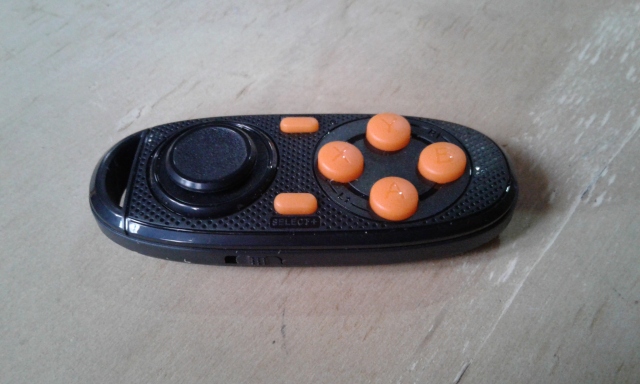 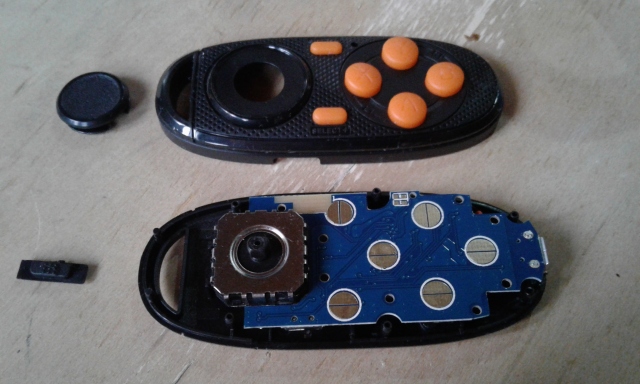 I'll keep messing with it a bit (any suggestions?) but if it's a no go I have the official DC stick, a 3rd party PS2 one or a 3rd party Wii stick to try.
(Would love to use 3ds sliders but they're not so easy to find at a reasonable price here.)

I like this one because it's got a slim profile, but am not gonna lose sleep if it's not gonna happen easy enough.
(Wasted way too much time trying to get PSP sticks to work properly in the past!)

In the meantime found out I don't have any resistors with low enough ohms to make the regulators for 3.3 and 5 volts.
More shopping. Weak.

(P.S. what image hosting do people use? I'm trying out tinypic.com but it's weird sometimes on my phone)

Providencial said:
(P.S. what image hosting do people use? I'm trying out tinypic.com but it's weird sometimes on my phone)
Click to expand...

You can host directly on bitbuilt, press the Upload a File button (I think you have to hit more options on some mobiles) and you can upload pictures straight into your post.

D'oh! The "upload a file" button is right there. I'll use bitbuilt hosting from now on. Thanks cheese.

My controller problem was a simple mistake in the end. I had left the IC that controls the joystick hall sensors connected and it was interfering with it somehow.

I've since desoldered the offending IC and the stick I wanted to use in the pictures above works fine as far as I can tell.
(Managed to blow the controller board fuse inside the console in the meantime, but had already sourced some fusible resistors so it was a quick fix.)

I have lots of work on for the next couple of days, but will hopefully have some time on the weekend to get on with the project.

Work is balls at the moment, but I found some time to do a little pad-hacking.
(And realised I forgot to put a name tag in the previous pics, so will remember to do that from now on.) 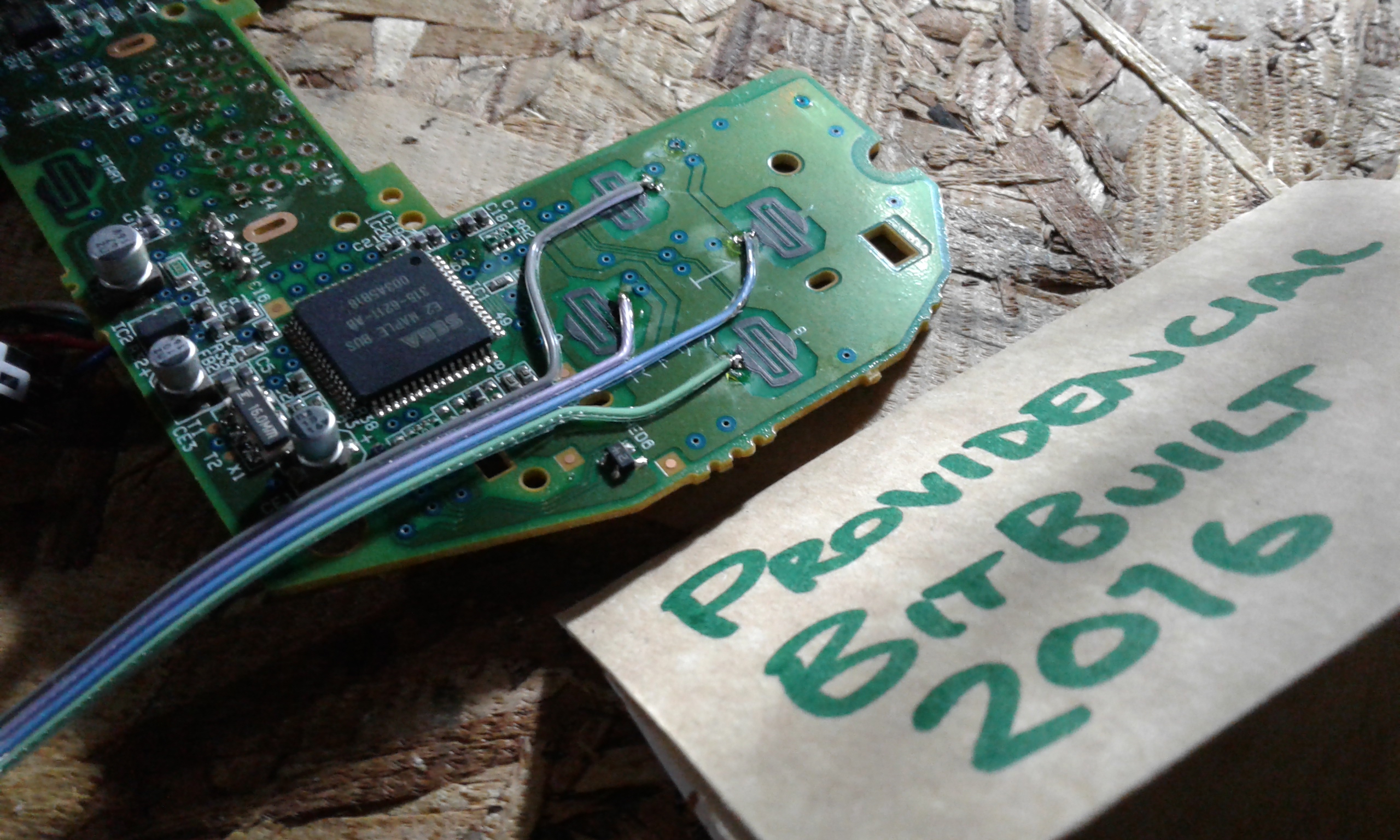 Have been working with a massive 6pdt switch to replace the analog and d-pad with just the slider, and having it switchable between the two functions. Once I have a less embarrasing mess of wires I'll post about that.
Here's the pad-hacking complete apart from the trigger lines and hot-glue dabs. 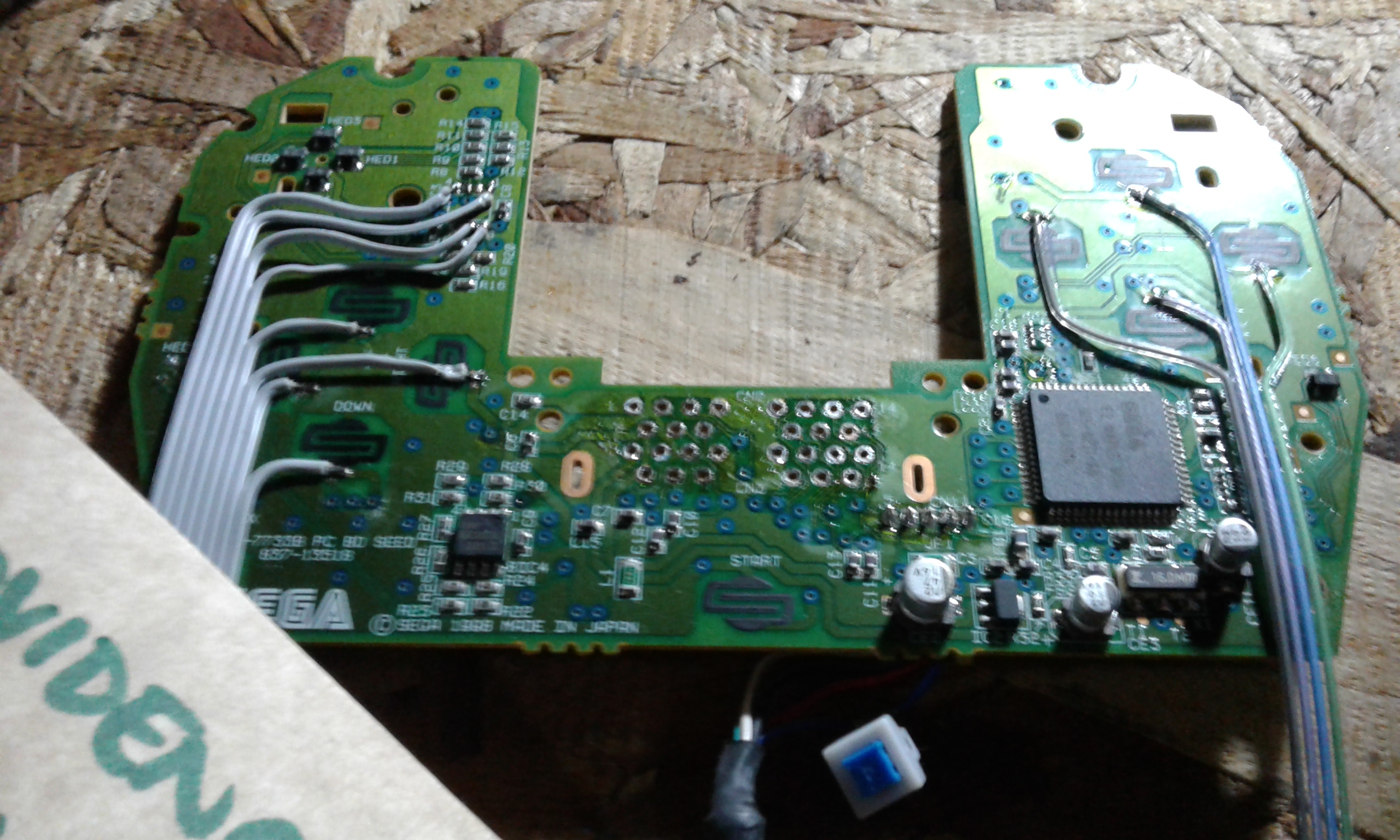 (The official DC pads have neat little vias for all the connections which are quite easy to work with, but I stuck with scratch'n'solder as it's easier to keep all the wiring flat.)

Got my 3.3v regulator wired up, am still debating which regulator to use for the 5v line. 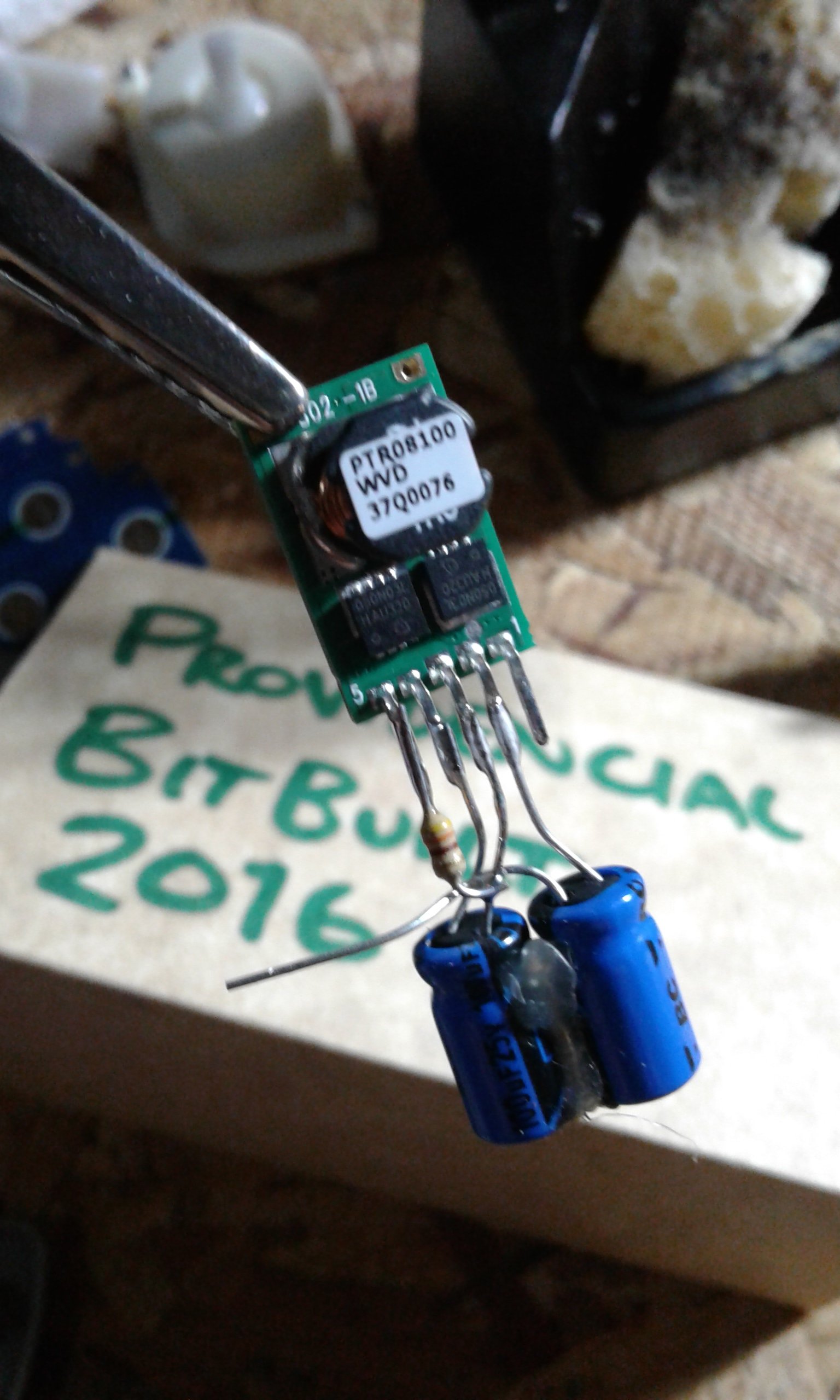 Didn't do a very compact deadbug job, but it works fine. I'll reorganise it smaller if I need the space later on.
(The anode on the left-hand cap goes behind the other wiring with good clearance; no shorts, don't worry!)

Does anyone have any input on the cheap "mini-360" buck regulators sold on ebay?

I have a few, and they're supposed to be good for 2 amps without a heatsink, then 3 with one.
They are a pain in the ass to set the voltage accurately, but seem to output fine once you have them sorted.

More tomorrow hopefully; any input on the regulators is welcome!

Those controller wires are routed so wonderfully. I've never had those mini-360 buck regulators, but I would bet they are pretty noisy since they're cheap and just... not made by TI.
I have a healthy obsession with Nintendo.

JacksonS said:
Those controller wires are routed so wonderfully. I've never had those mini-360 buck regulators, but I would bet they are pretty noisy since they're cheap and just... not made by TI.
Click to expand...

Cheers. Yeah, my instinct says not to trust them.
Will find another TI reg, thanks for the input.


Shank said:
Wow, those wires connections are clean and the layout is very organized. You have great hardware (GDemu) and great wire skills. This is going to be a great portable.
Click to expand...

Thanks. I hope so, but we have to see if I can pull off a decent case!

Wired up the 5v with another TI reg, and re-did the 3.3v line smaller. 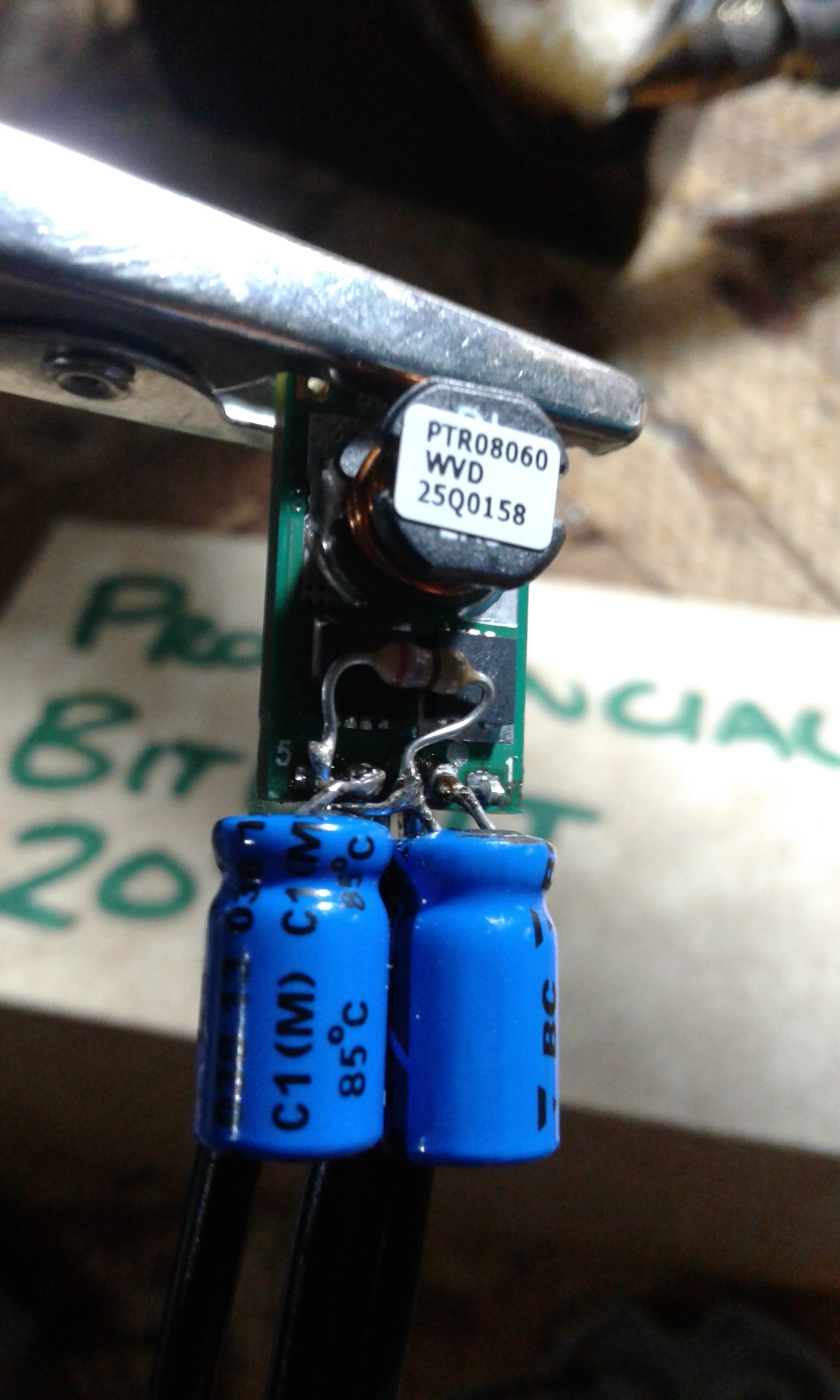 Now have the console running off batteries! 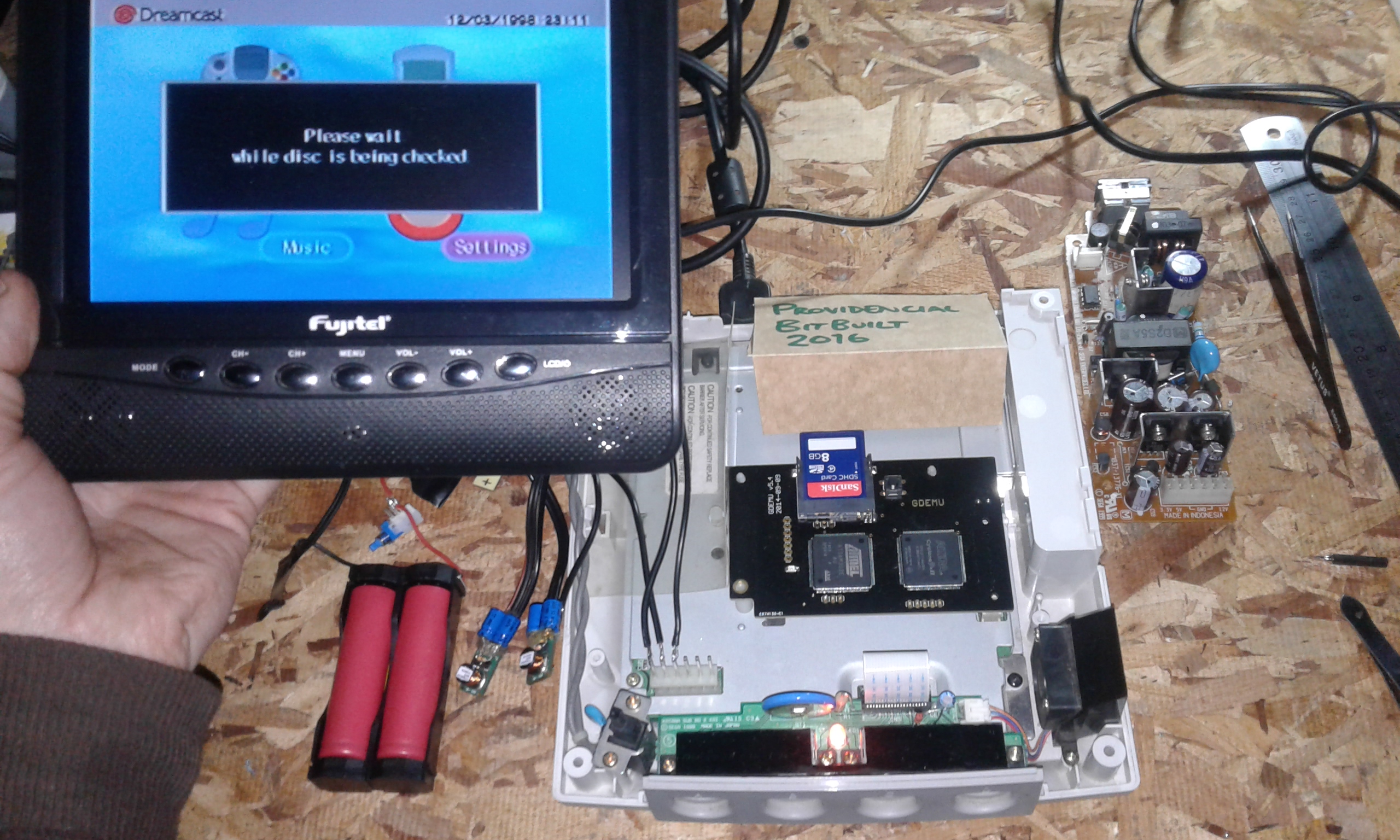 The GDemu is playing up and won't read SD cards. I hope it's down to the voltage drop as the 3.3v line drops below 3 under load; will investigate tomorrow...

You may need bigger input/output caps on the 3.3v line, if they aren't big enough they could cause a sag in the voltage (especially at high amperage draws).

Cool, I'll check it out tommorow. I just used the 100 uf caps which I had as I saw that figure in the datasheet, but looking again it does say it's the minimum.
Thanks.

The battery holder has really puny wires which I need to replace as they won't be helping matters.

Will be putting more batteries in parallel too.

Thanks a lot for the input cheese.

Between connecting up another pair of 18650's and fatter wires I found 0.1v, but the GDemu still wasn't playing nice.

I ended up doing a 4-resistor deadbug special to nudge up the voltage on the regulator as I don't have the right values.

Didn't take a photo before smothering it lovingly in hotglue: 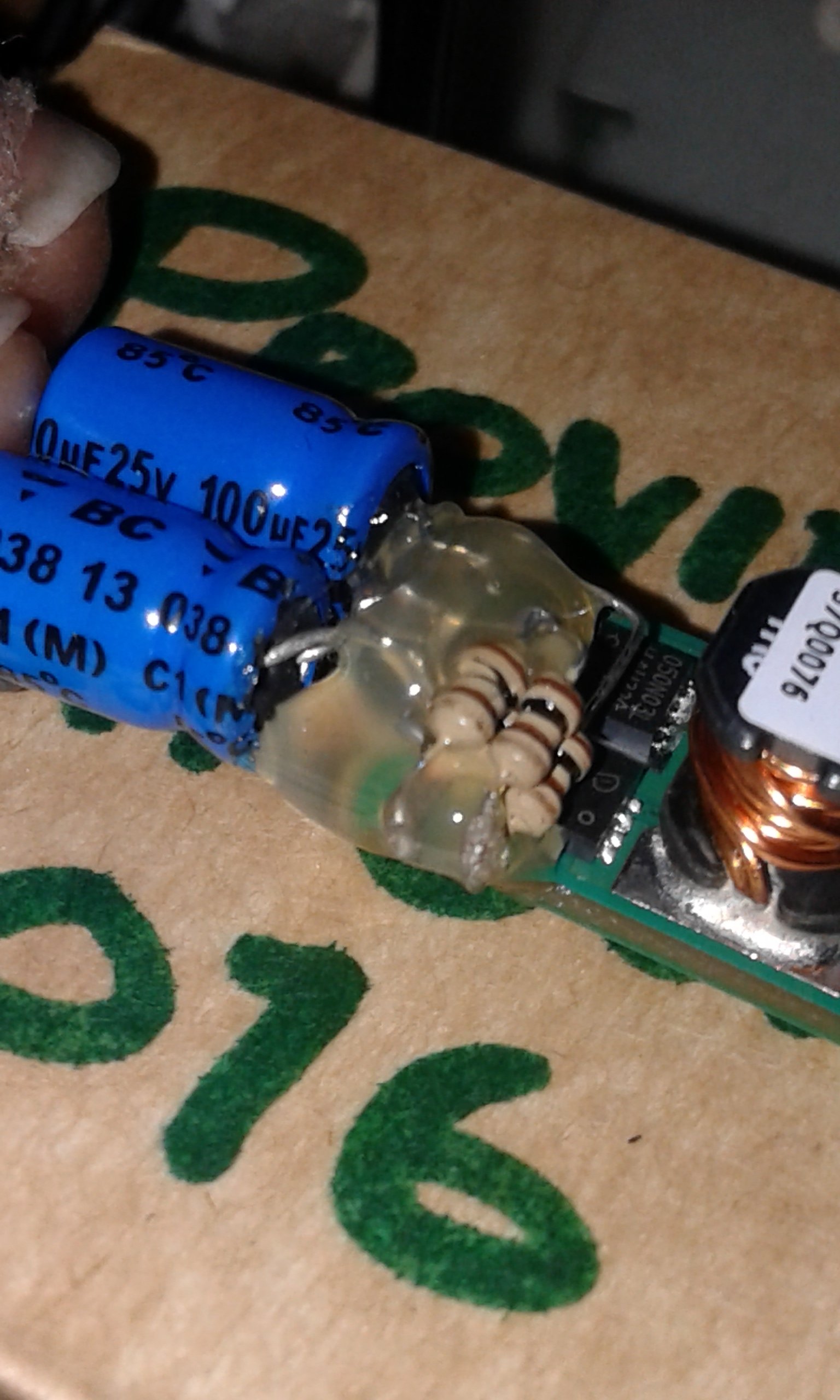 I'm working on the project only a tiny bit most days so it's a lot slower than I'd like... 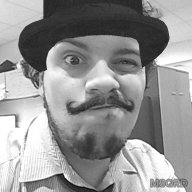 I have most of the provisional wiring done, but haven't even started the case, so I won't be entering the contest!

I'll move the thread to the normal worklog area if I can figure out how.

Thanks to bitbuilt for putting on the contest though, great idea I'm sorry I didn't get my act together in time!

I can move it for you. Too bad - I was hoping someone would enter something other than a Wii portable

I am dusting off (literally) this project and going to try and finish her off.
*Insert excuses about real life here*

Going back over my wiring I quickly found the root of the problem with voltage drop stopping the GDemu from working properly.

It's now 100% working off li-ions (see pic), and it seems I corrupted the data on all the other memory cards I was using before with the logic chips on the GDemu running at incorrect voltages. 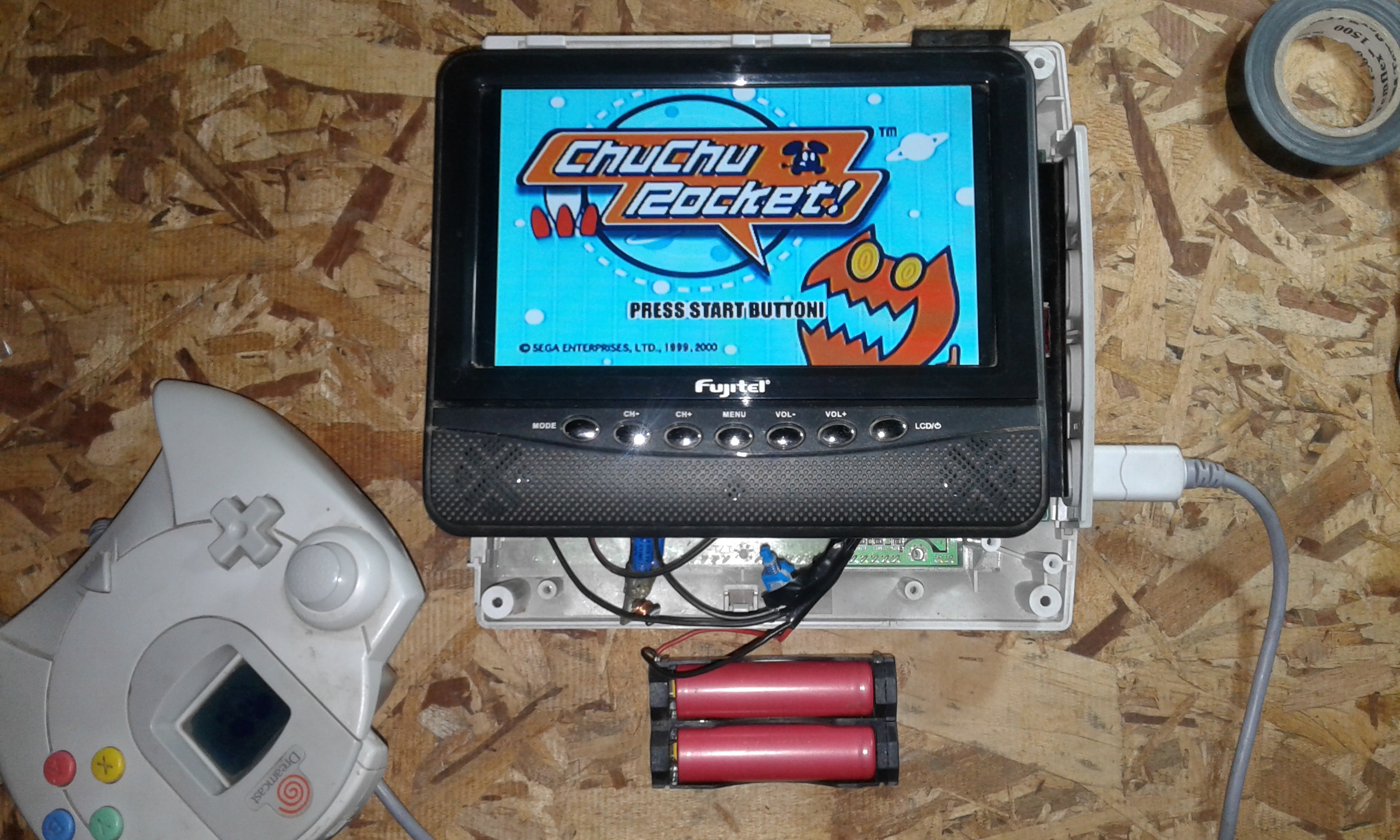 Since I started the project a new version of the SD card menu program has come out which makes using CodeBreaker to load disc images with the widescreen hacks much simpler (but it's still not ideal).

There was also some headway on patching widescreen hacks directly into the disc images, but the forum with all this info went down like a month ago with no sign of return (if anyone knows where relevant people from assemblergames have gone do let me know!)

I'll try and keep updating here so my momentum keeps up on the project and I don't abandon it another year...
You must log in or register to reply here.
Menu
Log in
Register
Top