This is going to be a really long post so here is a short version:
I want to build a Wii Portable using a L7009 screen and I want it to be like the switch, with a dock and MAYBE wireless controllers. (probably just wiimotes wired up to an analog stick and buttons inside) I have almost everything except for the screen and want to 3D print a case. I hope to finish this build in time for the contest.
I already finished relocating the bluetooth module and will probably trim my wii tomorrow.

Okay so after REALLY long I'm finally updating this thread with my actual project. The current plan is to make the nintendo Swiitch, like the idea I posted in the GC+ contest thread. The portable will have an L7009 480p component screen and a dock to charge and use external video. Maybe I can also add detachable wireless controllers (wiimotes with button connectors on the side of them internally wired to the GC+ in the portable), but that is the last priority. I really want to finish this portable in time. Also, if it is available on time I want to use a WiiHUD audio amp from @Aurelio, but I'm not sure since this project will be expensive af (if I count how many Wii's I've already destroyed, and the L7009) I've just finished the bluetooth relocation and already have my GC+, PTH08080's and controls. I will probably use Wii classic controller buttons and sticks. I also have an idea on how to implement the dock connector. I will post pictures later, natively hosted on BitBuilt, of course photobucket ftw. I'm not sure if the U10 is easy or not, but the bluetooth was way easier then I expected and only took me ~25 mins. I will perform the OMGWTF trim and use flat cell batteries, because I currently have a stack of 6 3500mah batteries from a powergorilla with a broken boost circuit. The cells are really small and quite thin for their capacity so it will be perfect for this build. I want to 3D print a case, and then sand and paint it the best I can but I'm not sure how it will turn out. I can always try to frankencase a ZN-45 if I really need to, though this would kinda kill the idea of a thin and light portable.

Moved, can't wait to see it!

This sounds very interesting. Remember to post noods at every opportunity!
"If you think a hot dog is a sandwich, then you're an idiot" - GingerOfOz, Sage of our era

I'm not very far at all yet, but the bluetooth relocation is working (i cut the traces but can still turn on my wii with a wiimote) so heres a picture of it

The trim in the guide has you slice right through the dd traces in like 6 different spots, and half of the traces don't even have vias to solder to, but if you're dedicated enough you _could_ put one in... I'd just put some kind of usb drive loader in the dock instead

BocuD said:
I'm not very far at all yet, but the bluetooth relocation is working (i cut the traces but can still turn on my wii with a wiimote) so heres a picture of it

It would be really cool to embed te disc drive inside of a dock; would this be possible, though? Can i attach the disc drive to a trimmed wii?
Click to expand...

Is the bt still plugged into the slot?
"If you think a hot dog is a sandwich, then you're an idiot" - GingerOfOz, Sage of our era

Stitches said:
Is the bt still plugged into the slot?
Click to expand...

BocuD said:
(i cut the traces but can still turn on my wii with a wiimote)
Click to expand...

Turning the Wii on is actually done with another pin, but if you can connect your remote after then the relocation worked fine.

cheese said:
Turning the Wii on is actually done with another pin, but if you can connect your remote after then the relocation worked fine.
Click to expand...

Yeah i can connect the remote so i'm happy
Btw heres a picture of the battery (still half assembled but wathever). Each pack of 2 cells measures around 4.4v. Is that still alive, or should i buy new ones? Wiimote for scale

4.4v is a tad above the normal 4.2v a protection circuit should allow.
"If you think a hot dog is a sandwich, then you're an idiot" - GingerOfOz, Sage of our era

Measure each cell individually, I'd say toss it if any of the cells are below 3.0v. That's basically the minimum I would suggest, and if they're below that, that cell is almost certainly damaged.

That looks like a 3S2P pack ((11.1v nominal) for a total of 6 cells) which would mean each section would be 2 batteries in parallel, keeping the voltage as if it were 1 battery, but doubling the mAh. That said it's hard to gauge the pack with the angle given.

I'll try to desolder the cells and measure them individually then, because these are some nice cells (if they aren't damaged). 4 cells would be ~51 wh if not damaged, so I really want to use them.
Nintendo Swiitch:⠀⠀⠀⠀⠀⠀⠀⠀Nintendo Swiitch 2.0:⠀⠀⠀⠀⠀ Swiitch 2.5:

Heres an update:
I started assembling the regulators and just finished with the 1v and 1.15v regs. The 3.3v regulator however... i think i killed it. I shall now bid to the bitbuilt gods and hope they will be able to help me fix it.. this is a picture of the dead reg: 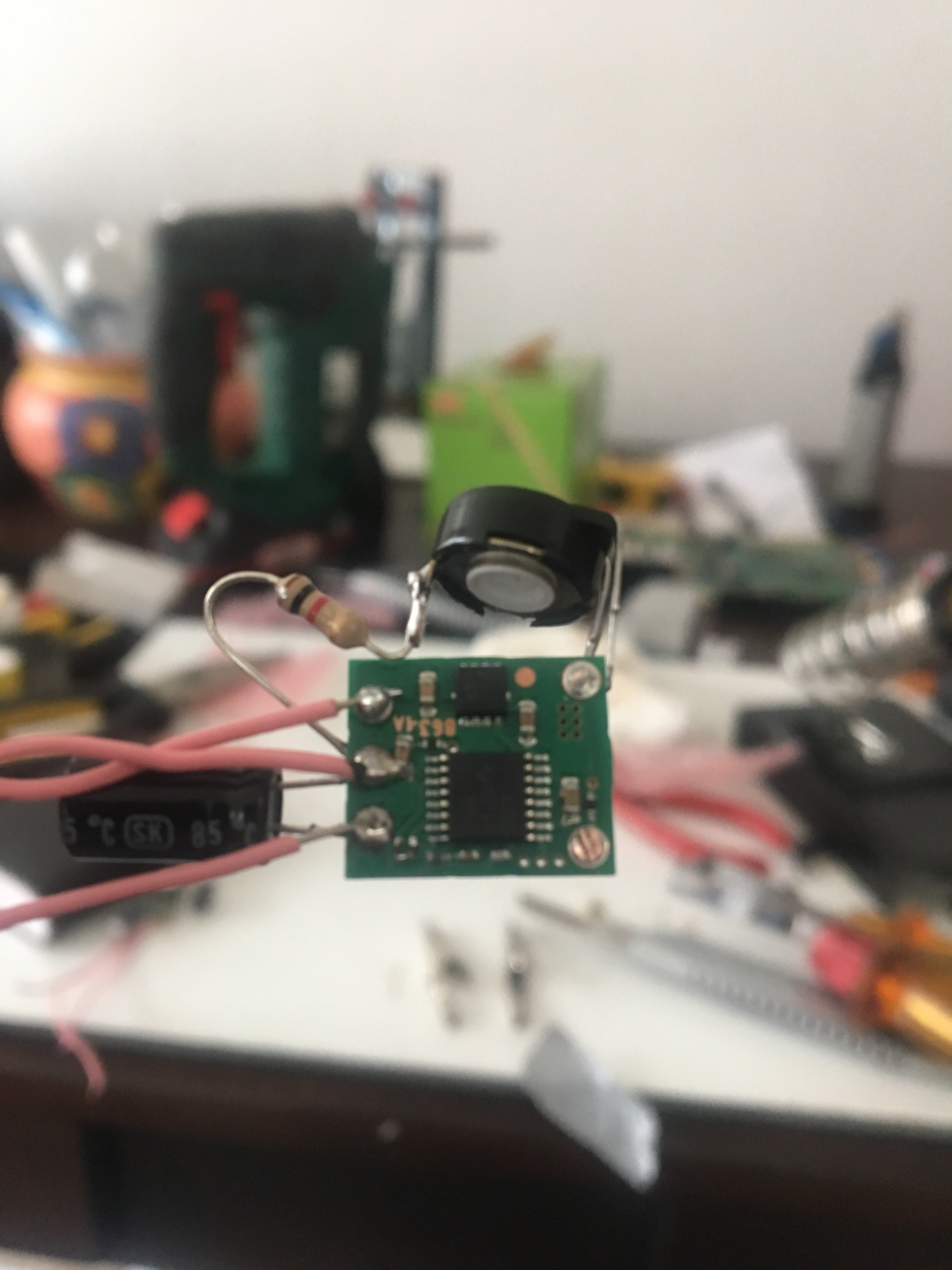 Heres all four of them: 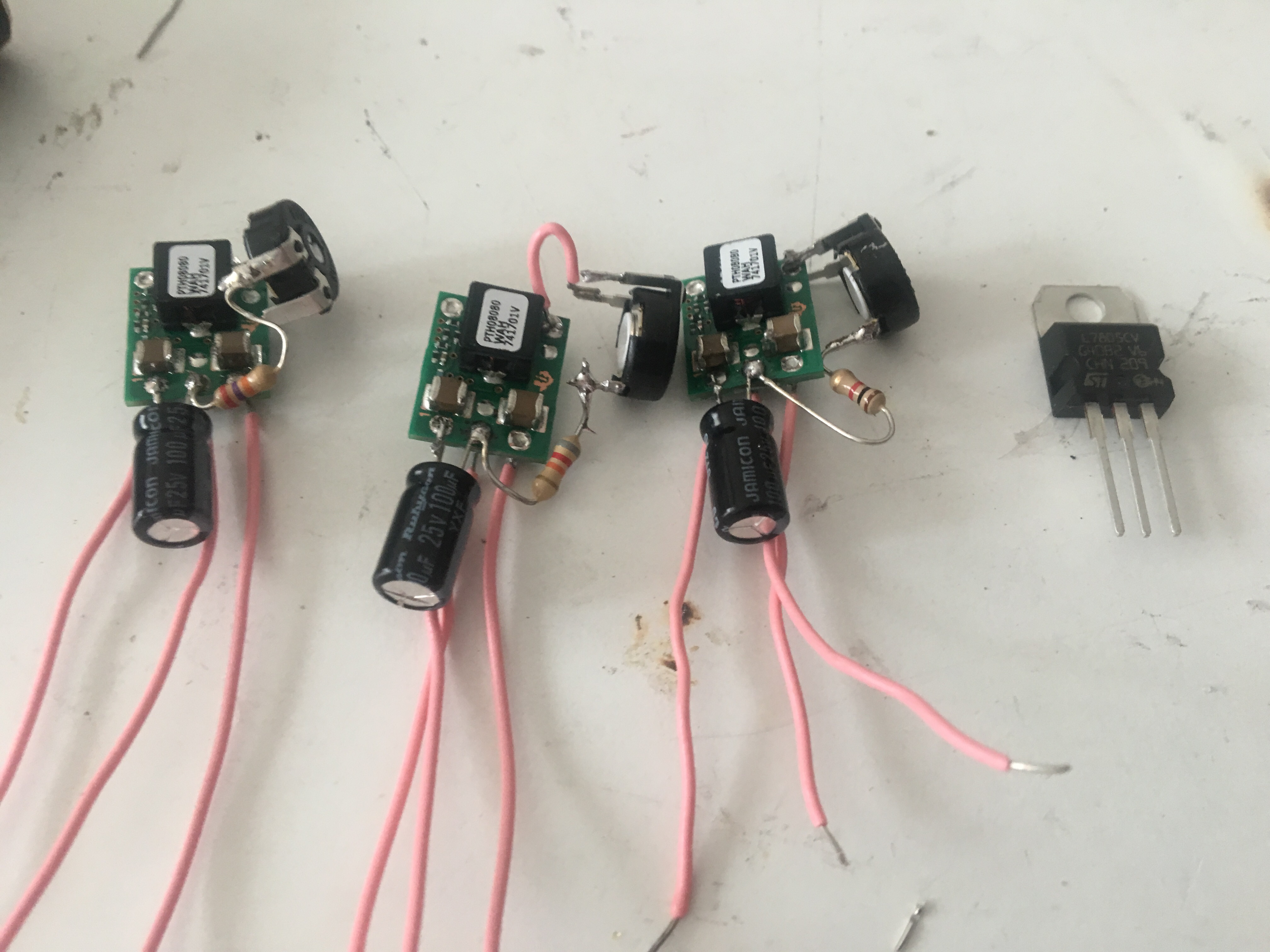 I used a resistor in combination with a potentiometer to be able to adjust the voltage later on. Thought it might come in handy. Also, i will just use a 7805 for the 5 v regulator. It is way cheaper then a pth08080wah.
I think my iron is just too big and that i knocked off some surface mount resistors, but im not sure.
Iron for scale: 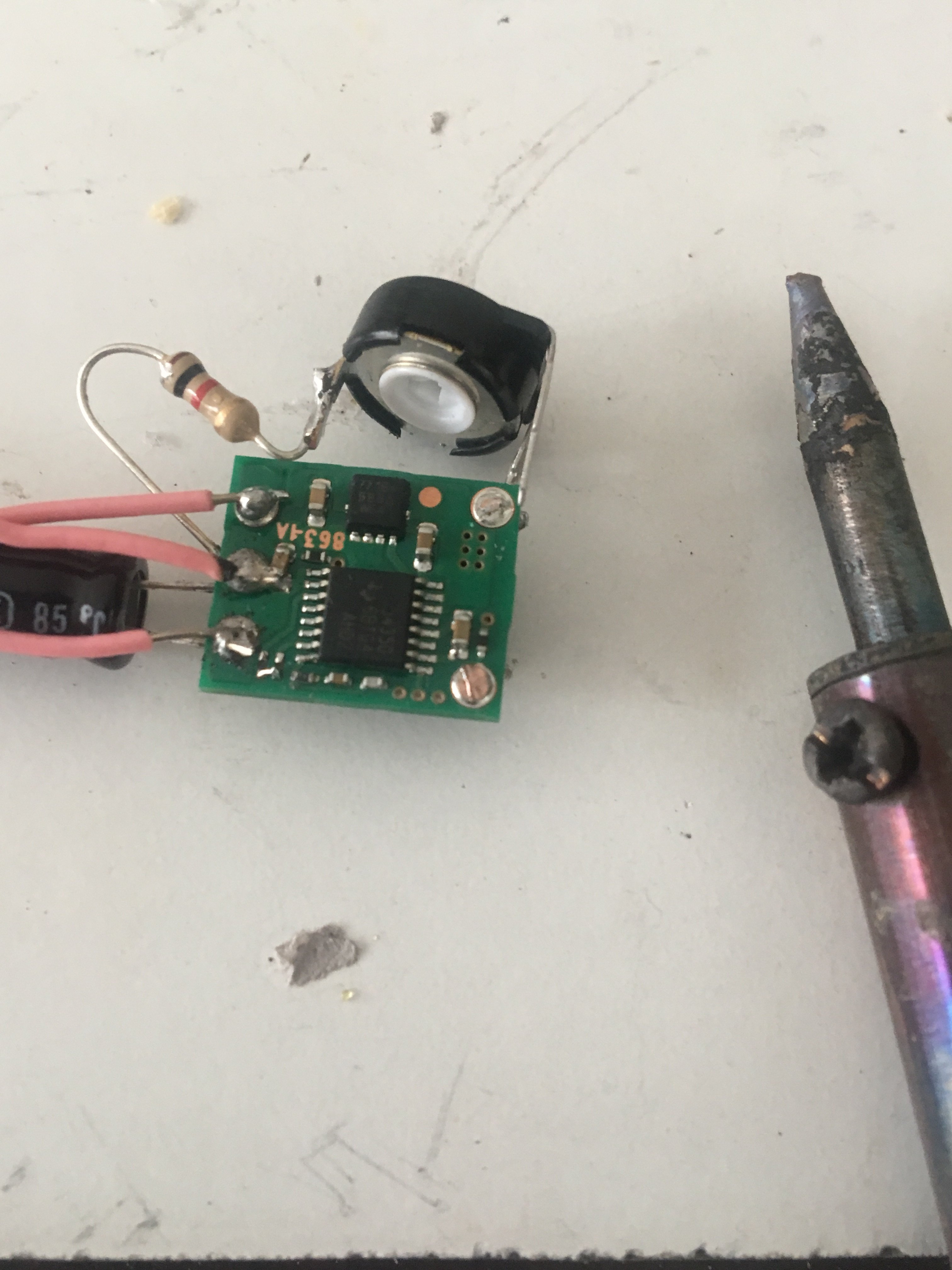 Now that i notice how big the iron is, im asking myself how the heck i was able to relocate bluetooth. Whatever, it works.
Also, i remeasured my cells, and they are all 4.3v, so they must be fine then.
Nintendo Swiitch:⠀⠀⠀⠀⠀⠀⠀⠀Nintendo Swiitch 2.0:⠀⠀⠀⠀⠀ Swiitch 2.5: 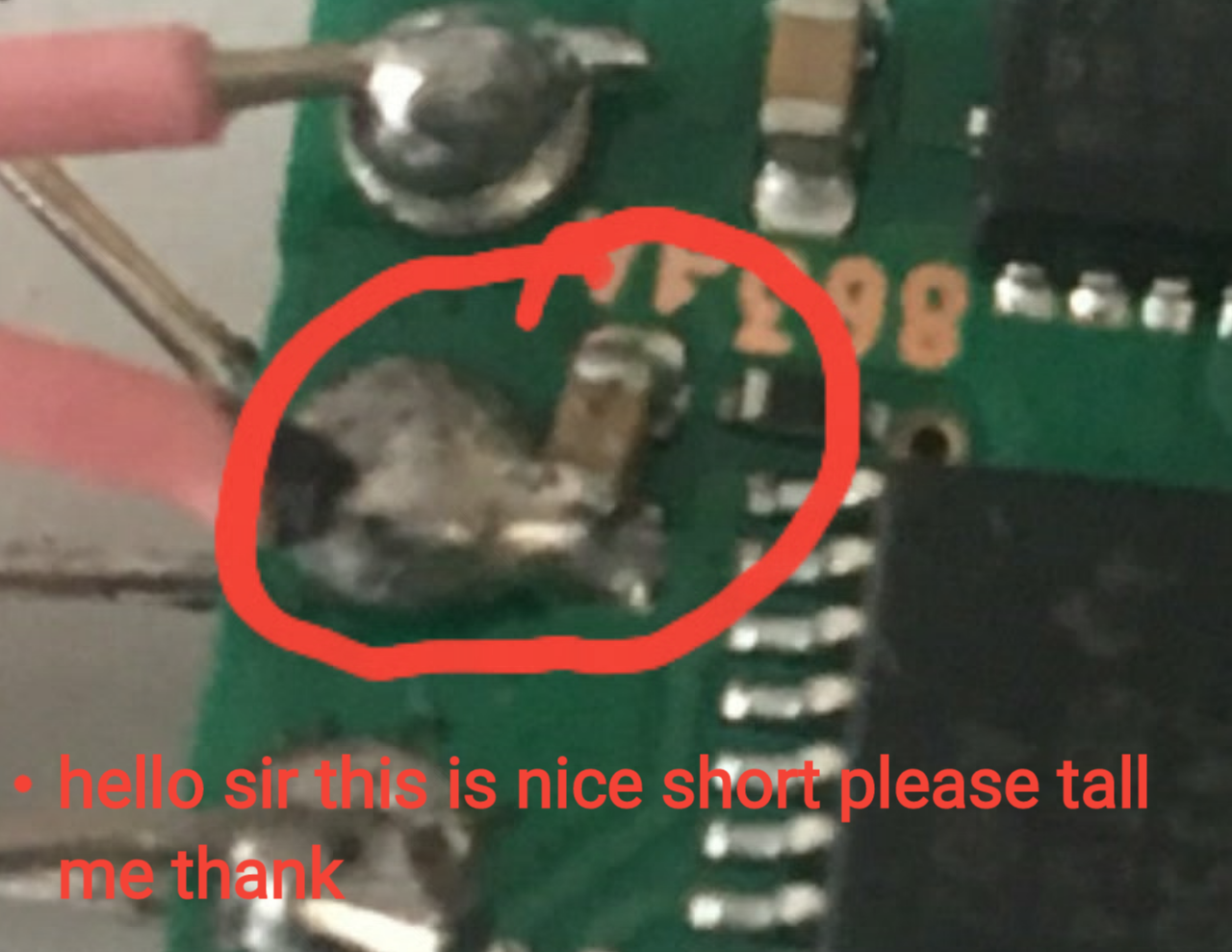 I have been PMed a total of 24 unique Waluigi memes, and sent 1 Waluigi pillowcase. Keep 'em comin'!

Desolder it and resolder it so that your wire and the solder are only touching the pad. If your solder spreads and makes a connection with other shiny components on the PTH, then it will cause a short.
I have been PMed a total of 24 unique Waluigi memes, and sent 1 Waluigi pillowcase. Keep 'em comin'!

Okay... I just noticed something else. I have your short in blue, but it looks like I also removed some surface mount resistors... Thats gonna be a new regulator, I guess. 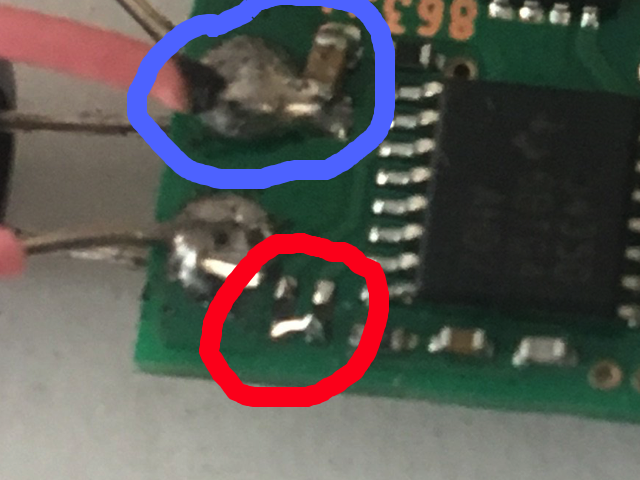 Ouch. I'd still try to fix the short and see if that revives it. You should probably get a better iron tip if that's what knocked them off. You should probably get one anyways, as a narrow tip will make soldering to the little things a LOT easier.
I have been PMed a total of 24 unique Waluigi memes, and sent 1 Waluigi pillowcase. Keep 'em comin'!
You must log in or register to reply here.
Menu
Log in
Register
Top