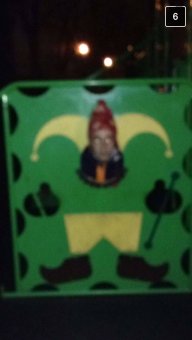 I've been working on a portable for a long time now, and I'm on my way to mounting the last few buttons (!!!!), but before I put the finishing touches on this bad boy and close it up, I want to put in some hardware for the offchance I scavenge up enough time to forge another portable, I can use my current portable as a kind-of satellite portable player two.

The idea is that the master console (player 1, my next console if I make one) would have a switch to broadcast a composite signal wirelessly in a nearby range. My current portable, the satellite console, would have a video receiver attatched to AV2 of my monitor, and would have a switch to broadcast a gamecube controller signal wirelessly in a nearby range, which would be received on a chip on the master console under player 2. Using this, if I end up making more portables, I can connect them wirelessly and no longer sacrifice multiplayer compatibility with portablilization. One system would do the work, and broadcast the visuals (and possibly audio if that can be figured out) while other systems simply receive video and send their controller outputs.

If I were to embark on this, hardware-wise what should I be looking for? My current portable takes in 12V (didn't put in custom regulators and at this point it's too late), so I can handle any chip that takes up to 12V. Am I crazy or is this doable?

It's entirely doable, though your implementation will depend on many factors, including what kind of controller you want to use (wii/gc), how you want to transmit and receive the video, and mainly, how much you are willing to spend and sacrifice in space.

Composite streaming is completely doable and there are a lot of boards that do that (for example you could look at transmitting/receiving boards for fpv systems in rc models).
The controller streaming is a bit harder since the protocol is not standard. You might need a custom made board just to handle that.
If you want to support the development of my projects, consider becoming one of my patrons: https://www.patreon.com/aureliomannara.

yo what about some really long wires
"I've been cranking it to Marshall's work for the better part of a decade. I have no intentions of stopping anytime soon." -bud

Wavebirds are looking likely here- I also have a mini wireless gamecube controller I bought for my little sister back in the day from Gamestop, which is looking more and more ideal here, because it's small AND wireless (amazon)! Wavebirds on the other hand have a very large board and trimming a wavebird is reeeeeealy not documented. Smaller third party controllers would maybe fit here without trimming. We'll see.

AV wireless chips look pretty expensive! Commercial products designed for home solutions run $50-$200, DIY chips are more reasonable clocking in at ~ $30 for chips which don't seem to come with receiver solutions (1 2) so we'll see where to go from here. The portable I'm finishing up I plan on making a video receiver and controller transmitter (so not the master system) but because I finished my case already I'm struggling to think of a way to switch between playing single player and choosing to be player 2 (or 3 or 4). This is not only because I have nowhere left on the case to put a switch but also because I do not have custom regulators, and therefore have no way of getting 5V for a transmitter and receiver without powering on the whole damn system - a dumb setup for player 2 3 or 4. This problem would be fixed if I decided to make this current portable the Player 1 console - when playing multiplayer the motherboard would have to be turned on. However, this causes OTHER limitations- I still need switches to turn on players 2 3 and 4 and to broadcast video (because it would not be at all efficient to have those running all the time at all) AND this first system has a gamecube motherboard, limiting multiplayer games to just gamecube - no mario kart wii, no super mario bros wii

Anyways, thats all a me problem, not a problem with the concept. I'm going to focus more on finishing up, and if I have time and money to spare to work on wireless I'll find ways to address these issues.
Last edited: Oct 27, 2016

Kanelot said:
Wavebirds on the other hand have a very large board and trimming a wavebird is reeeeeealy not documented.
Click to expand...