I've actually been working on this for a long time, but I rarely have time for this stuff. I figure I'll make a worklog here as a way to keep myself working on it.

I had a horribly beat-up (functional) Micro and a non-functional SNES controller, so I decided to do the obvious. The plan is to map the X and Y buttons to Start and Select, since the screen took over where the original S+S used to be. Also I'd like to wire up a micro USB port for charging, so I can bypass the proprietary Micro charger. So I need to relocate the headphone jack, volume buttons, and power jack.

I need to be able to put in a game cart, but I don't want to cut a huge hole in the controller. I decided to try and figure a way to completely enclose the game cart, so that you can just open it up (it will be held together with magnets) and switch the game out. Will it work? No idea.

What I've done so far
I already have the screen cutout, as well as holes for the headphones, power, and volume buttons. The headphone jack and volume buttons are already installed. I did a few things backwards because I wanted a good-looking proof-of-concept for a different forum. So, basically nothing in theses pictures is functioning, but I like these pictures because it shows the vision in my head. (and the finished product will look almost exactly like this.) 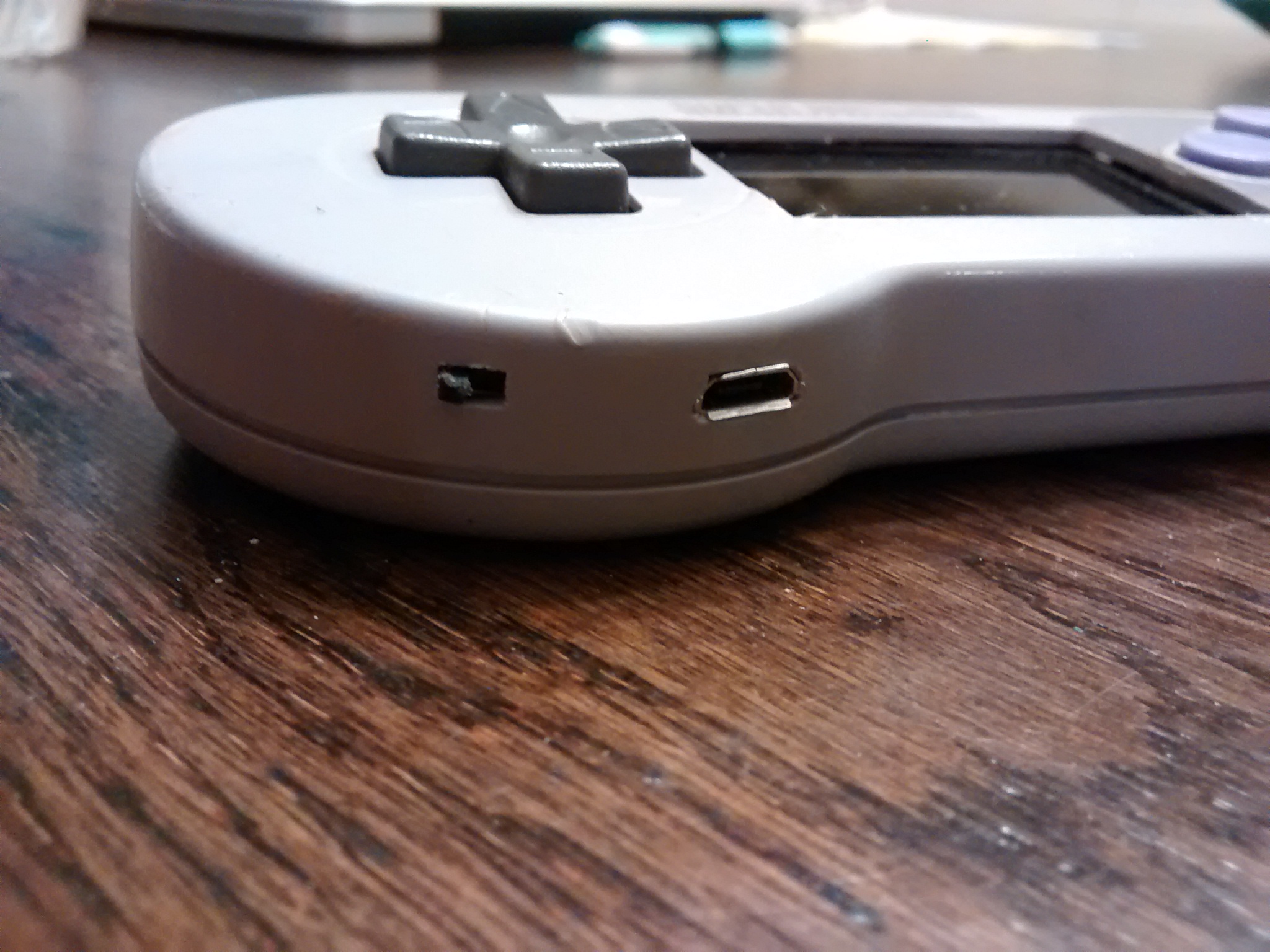 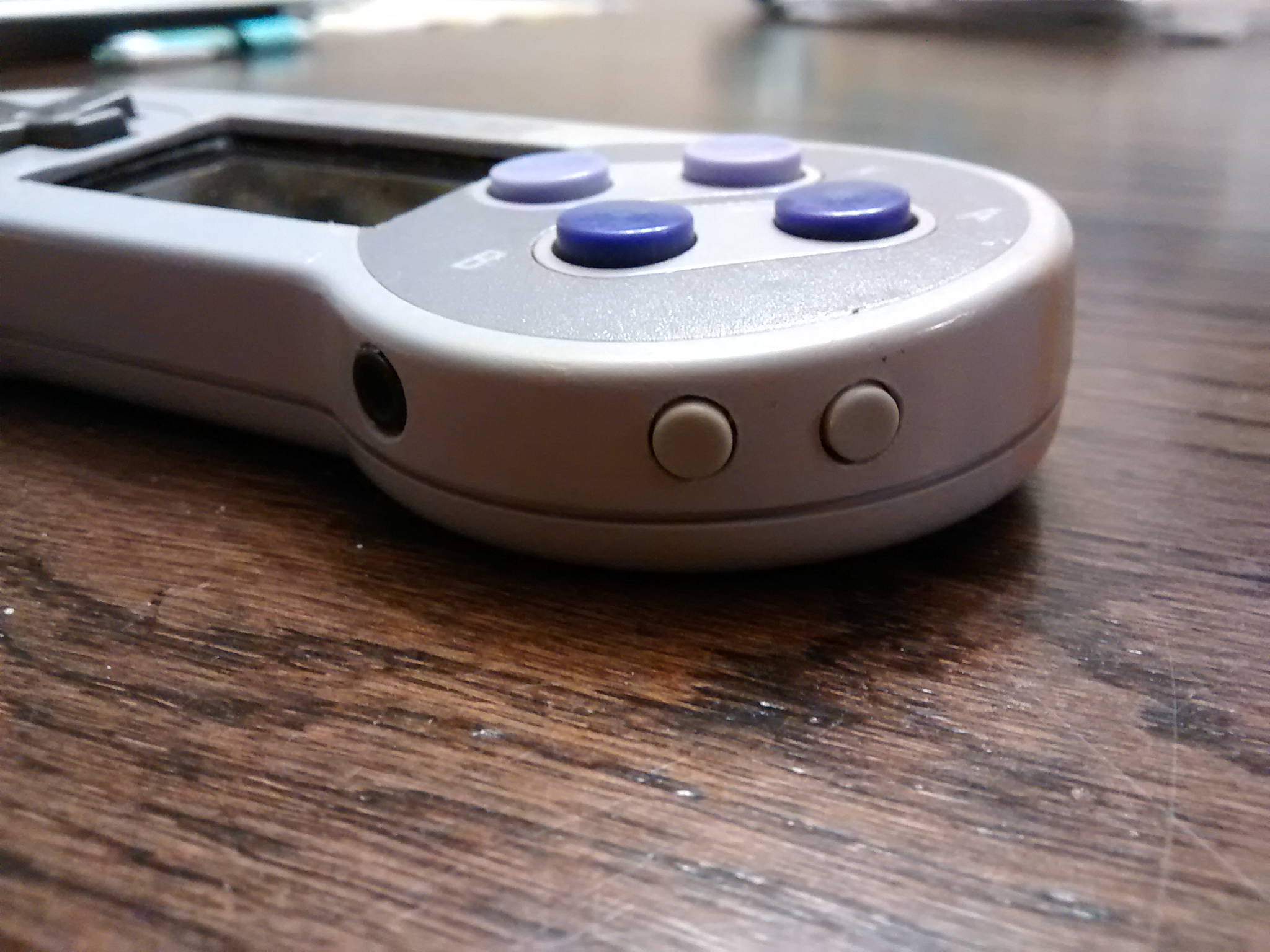 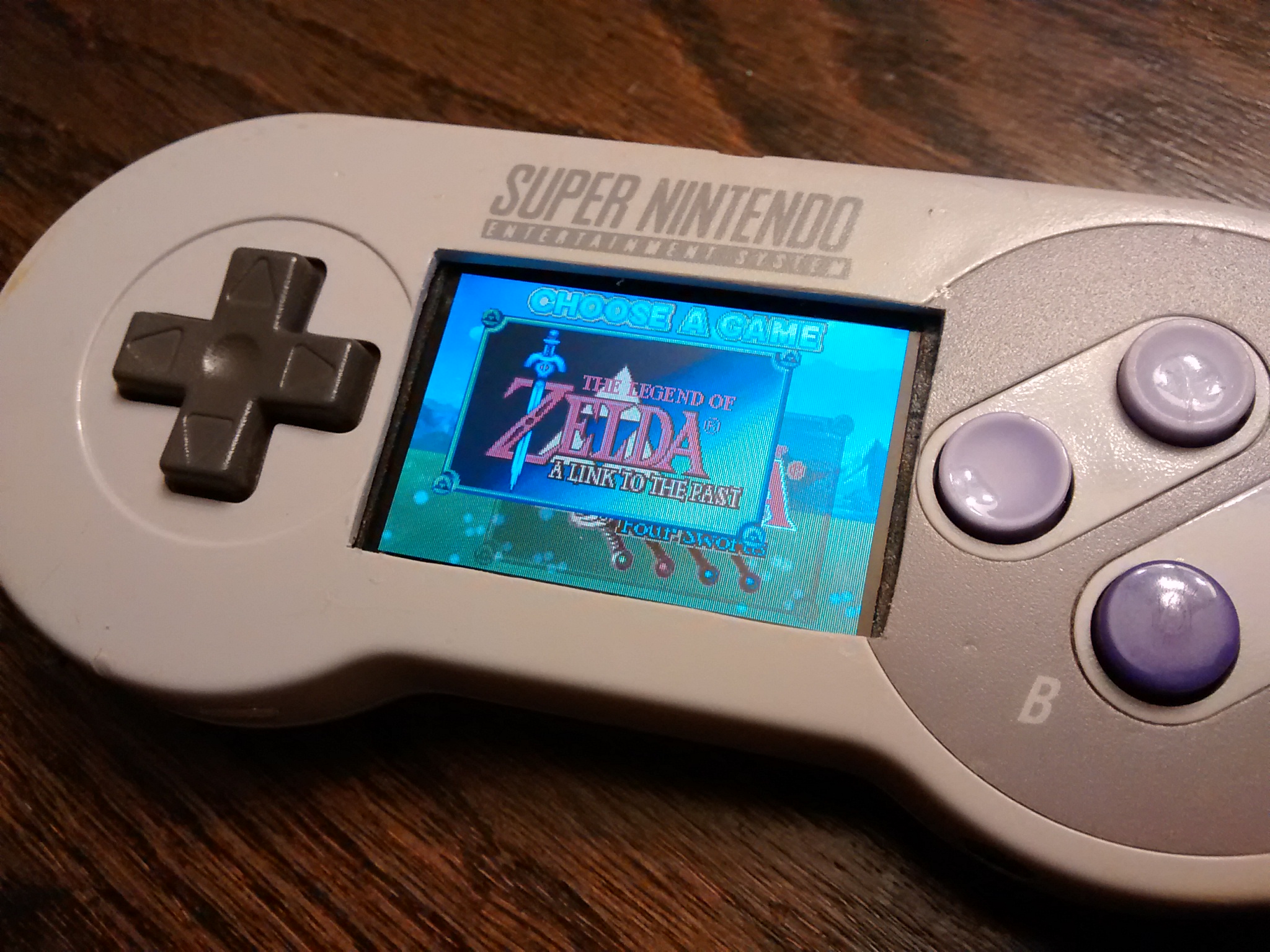 What's left to do
Wire the buttons to the board. Wire the power jack and headphone jack to the board. Close it up. What's so hard about all that? The biggest problem I have is space. I had originally planned to keep the SNES controller board inside, and I wired all the buttons up, but there was no room for the battery, and definitely no room for a game. No matter what I tried. After getting upset and moving on to other projects for a couple months, I came back to modretro and bitbuilt and looked through some of the finished projects. No joke, it honestly inspired me to do whatever it takes to finish the project. A couple of compromises are way better than just never finishing it.

So I dug all the parts back out, and faced the reality that I can't use the SNES controller board. I ordered a bunch of teeny-tiny tact switches from China. I really wanted the finished unit to still feel like a SNES controller, so I wasn't thrilled about using noisy, clicky tact switches. I glued them on, then discovered squishy tact switches that use a silicon membrane, so they aren't super loud and feel more like an OG SNES controller. I figured they had to exist, but I was never able to find them. Anyone looking for them should do a search for "soft tact switch." So I ripped the buttons apart and glued the squishy tacts on. The L and R buttons are still noisy tacts, but I think I'll wait and make sure everything else is going to work out before I rip them back apart. Without the controller board inside, the battery fits.

There's still the issue of fitting the cart inside the unit. The GB Micro loads from the bottom, and unfortunately, the SNES controller gets thinner as it goes down. I guess I could relocate the cart slot and flip it upside down. That would be easier than flipping the whole board, and rewiring the screen. Another option is to just use a flash cart with SD card, since a game PCB without the outer plastic shell will fit. Just keep the flash cart in there, basically for good, and maybe the SD card will be nice and accessible. If I go that route, I could potentially cut a hole in the controller and allow removal of the SD card without opening up the unit.

One more setback is that there's a tiny daughterboard on the bottom of the micro, which holds the select and start buttons, and the charging indicator LEDs. The ribbon cable broke. So I'm looking into what solder points I can use to reattach it to the main board. Should be possible. 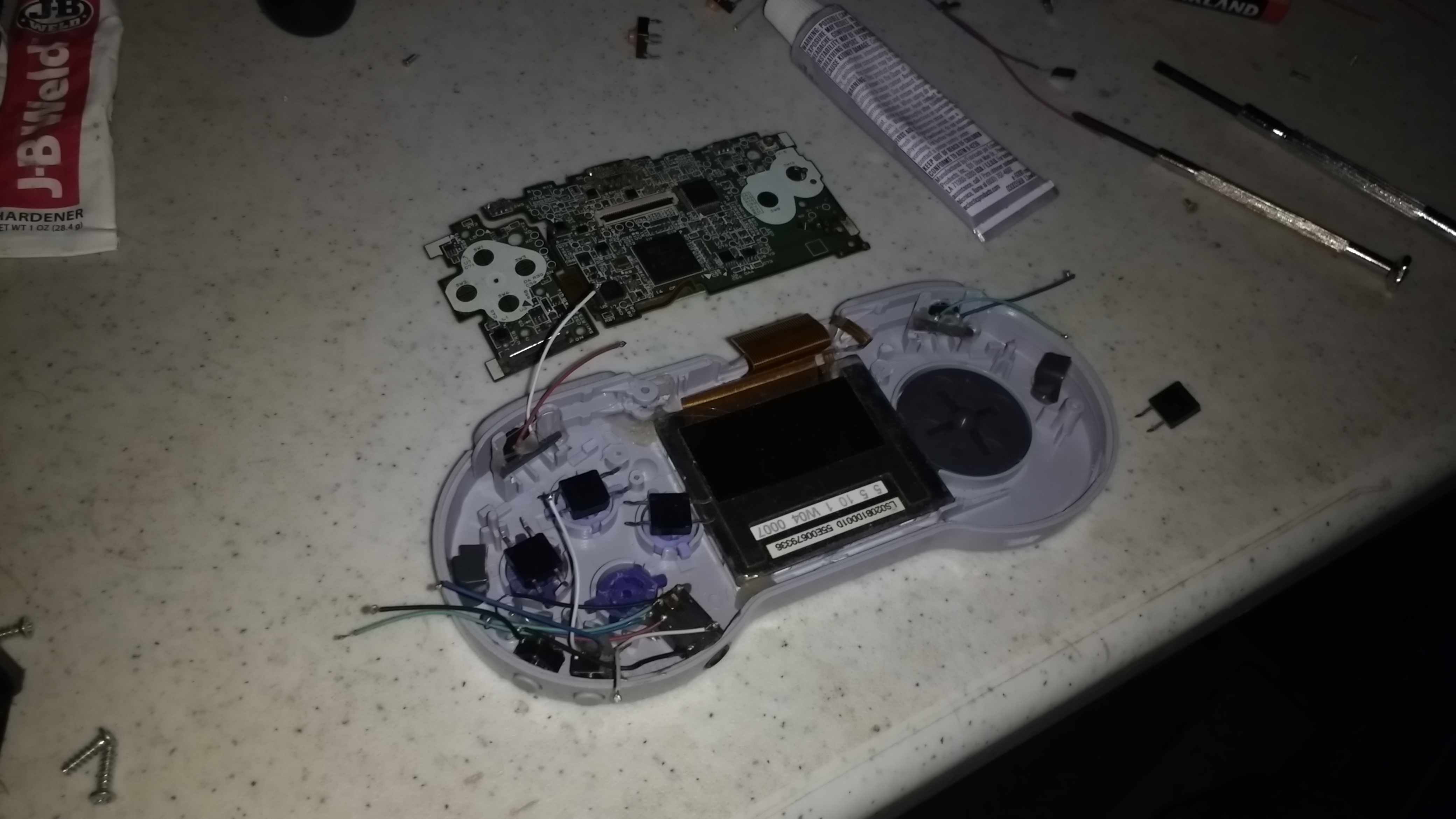 I love it!! The micro was my favorite rendition of GBA

I love these kind of projects

Shank said:
but dropped the project.
Click to expand...

Looks cool so far, hope you can get the start/select ribbon cable issue figured out! You may have to scratch the traces with an xacto knife and solder to those

It broke really close to the daughterboard. I scratched off the coating to find that there are 4 traces. (start, select, LED, ground?) There's so little of the ribbon cable attached to the tiny board that there's no way I can solder to it, but it's just enough to do some continuity tests if I'm careful.

I wouldn't expect you to solder to the cable, that's probably not gonna happen

You could solder directly to the buttons/led to complete their connections. Also, that last pin is most likely ground, since the buttons and led will need it

@splain, your name. This needs to be done. 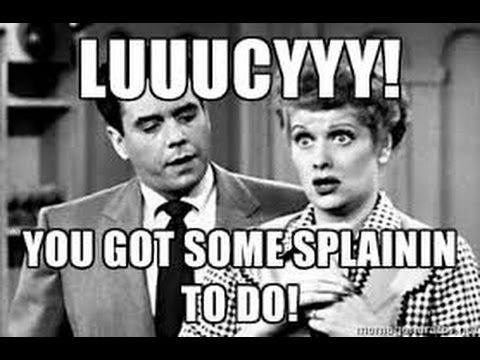 The sun is shining...

I like this. I put one (mostly) inside a GC controller once.


Micros are really nice.
"I've been cranking it to Marshall's work for the better part of a decade. I have no intentions of stopping anytime soon." -bud

I have another micro (that doesn't power on for some reason) that I was able to use to identify points on the main board that connect to the button ground, start button, select button, and LEDs. Lots of guessing, but I found them. Some of the contact points were tiiiiiny pinholes that were tricky to solder to. I wired everything back up, but now the micro won't turn on. Completely unresponsive. The fuses aren't blown, and nothing seems amiss with the new wires I added. I'll keep checking it, but... I may be looking for another micro. Fortunately, this was all just to restore functionality that was lost when the ribbon cable broke, so if I have to get another micro, I'll just be more careful and avoid having to do any of this.

splain said:
I have another micro (that doesn't power on for some reason) that I was able to use to identify points on the main board that connect to the button ground, start button, select button, and LEDs. Lots of guessing, but I found them. Some of the contact points were tiiiiiny pinholes that were tricky to solder to. I wired everything back up, but now the micro won't turn on. Completely unresponsive. The fuses aren't blown, and nothing seems amiss with the new wires I added. I'll keep checking it, but... I may be looking for another micro. Fortunately, this was all just to restore functionality that was lost when the ribbon cable broke, so if I have to get another micro, I'll just be more careful and avoid having to do any of this.
Click to expand...

Check all the solder joints, and check for any balls or drips of solder that might have formed and bridged something. I killed a Cube once because one tiny errant bead somehow found its way between 12v and a very sensitive data line and fried the whole thing.
"If you think a hot dog is a sandwich, then you're an idiot" - GingerOfOz, Sage of our era

I finally came across another micro that powers on but looks like death. Perfect! The first thing I did was hot glue the tiny daughterboard to the motherboard, to avoid another accident. The speaker on my first micro was busted, so it's good to have a working one again. I've got the ABXY buttons epoxied into place, I love those squishy tacts. I put together 4 tacts on a thin piece of plastic for the D pad. I made some room for the speaker, above and between the screen and ABXY. Drilled a speaker hole, and a hole on the bottom for the charging LEDs, which I'll diffuse with hot glue. I'm racking my brain for anything else I need to do to the case before I start wiring everything together. Getting close! 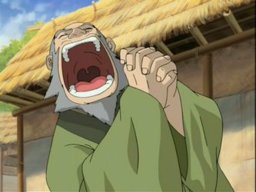 Well I feel stupid never even heard of the game boy micro. Great work though, snes controller is way to tiny for me to try.

In case anyone is curious, I did eventually finish this and it works great! I ended up getting an EZ Flash IV, which I took out of its plastic shell, so it could live in this SNES controller semi-permanently. Ideally, I would have come up with a way to play carts on this thing without having to take them apart, but at least this doesn't have any gaping holes in it for the cartridge. And I do still use this to test carts that I'm troubleshooting, I just can't put the back cover on it when I do.

I did swap out the tacts on L and R in favor of squishy ones, which was annoying to do, but that's definitely one less regret I have for this project. Stuff like that is always worth it IMO. I got every button and switch glued to the front shell, with tinned wires hanging out, and then I started soldering them to the micro mobo, starting at the bottom, and leaning it further in until everything was attached. I made absolutely no effort to avoid spaghettification. It's a mess in there. After browsing worklogs on Bitbuilt, I definitely wish I had gotten some magnet wire, and fed everything via the top edge of the controller, so that when everything was attached I could just lay the board down and hot glue it or something. That would have made it much more serviceable in case something stops working.

It's held together with neodymium magnets, which are mounted on the grey rectangles visible on the far ends of the controller. So when I want to take it apart, I just grab both sides and pull it apart. The back shell isn't attached to anything on the inside. I thought I had more/better pictures, but these are the only ones I can find at the moment. I may need to take more. 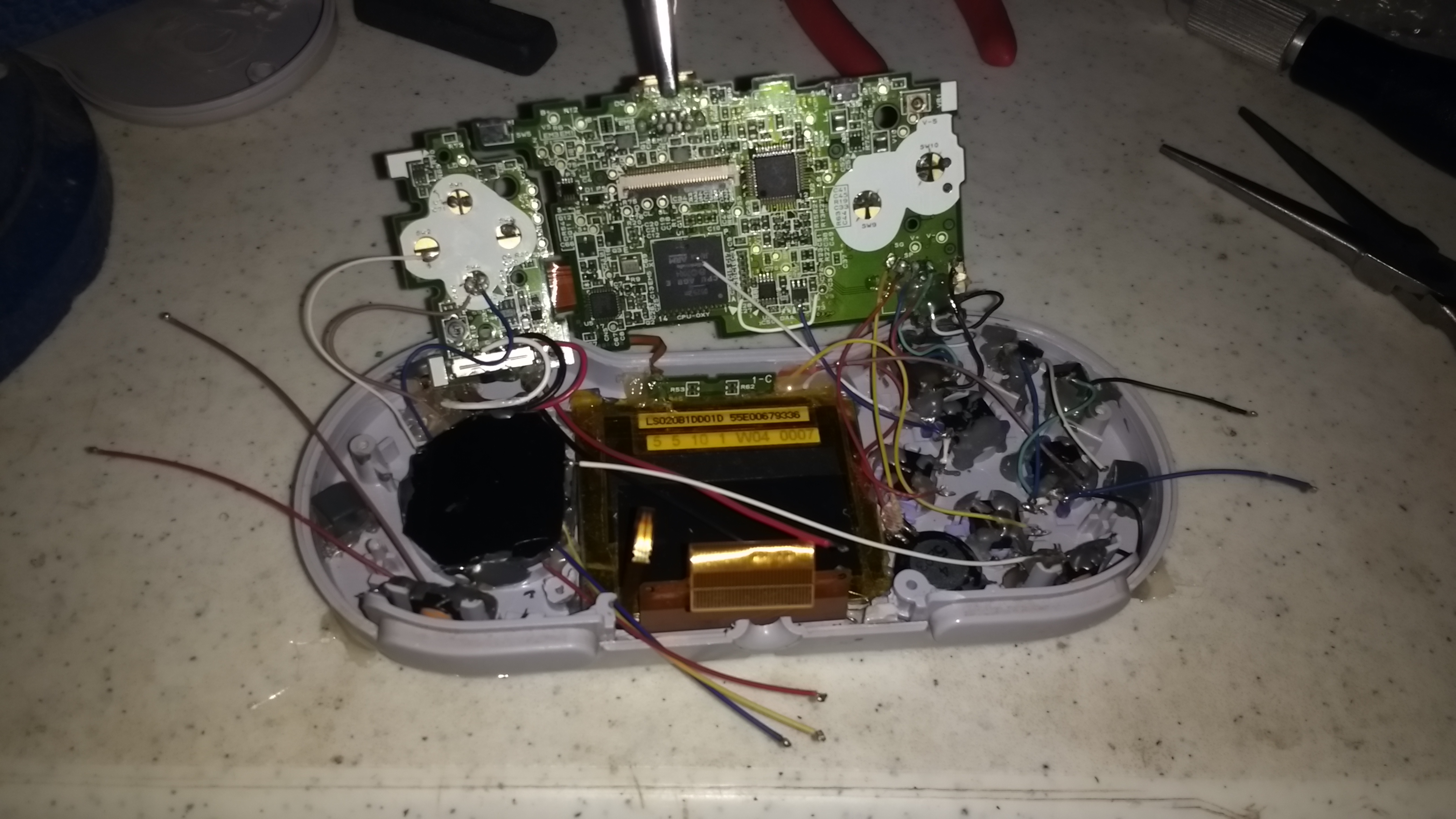 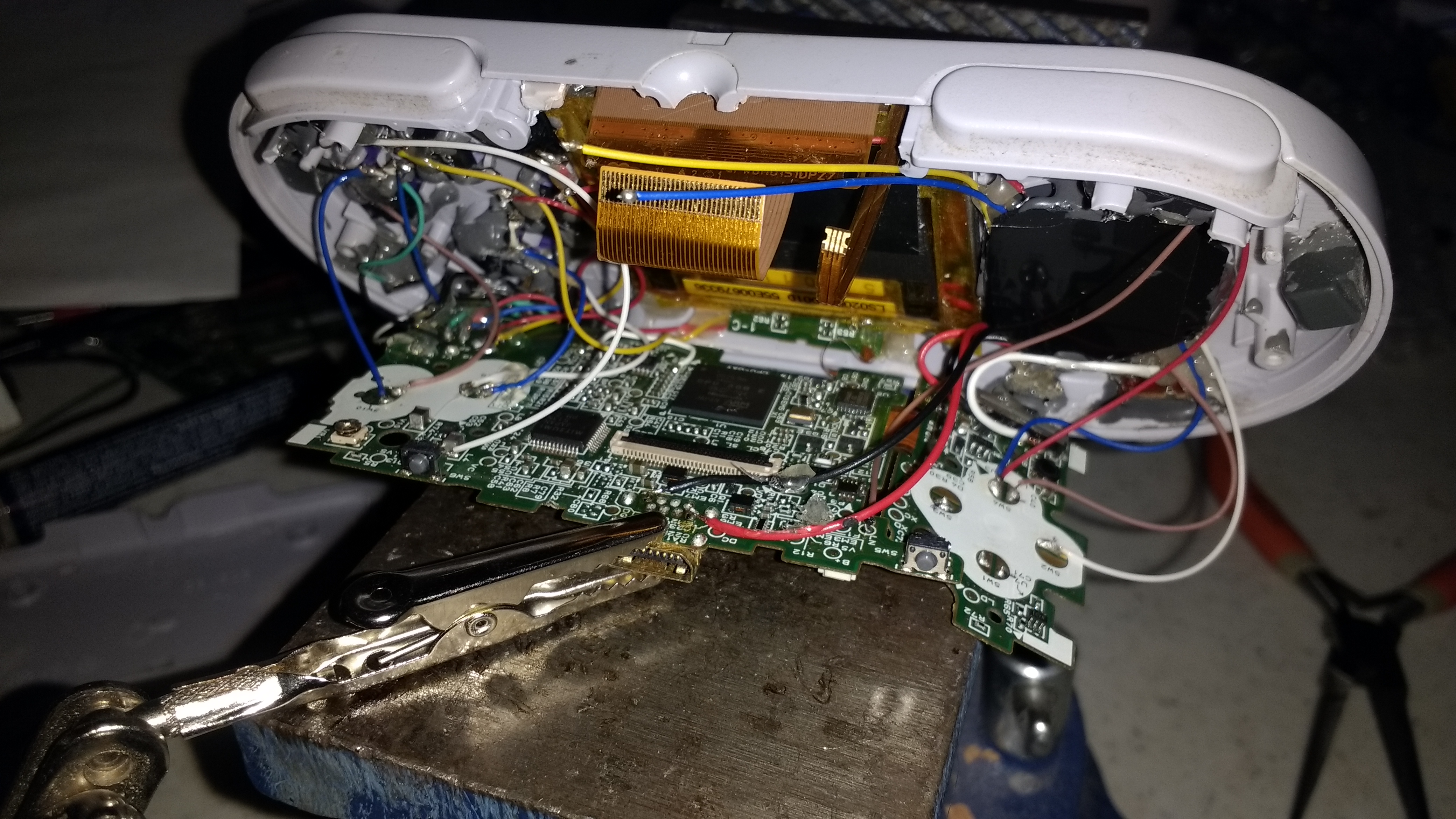 Then here's a picture I used to show it off on reddit a while back: 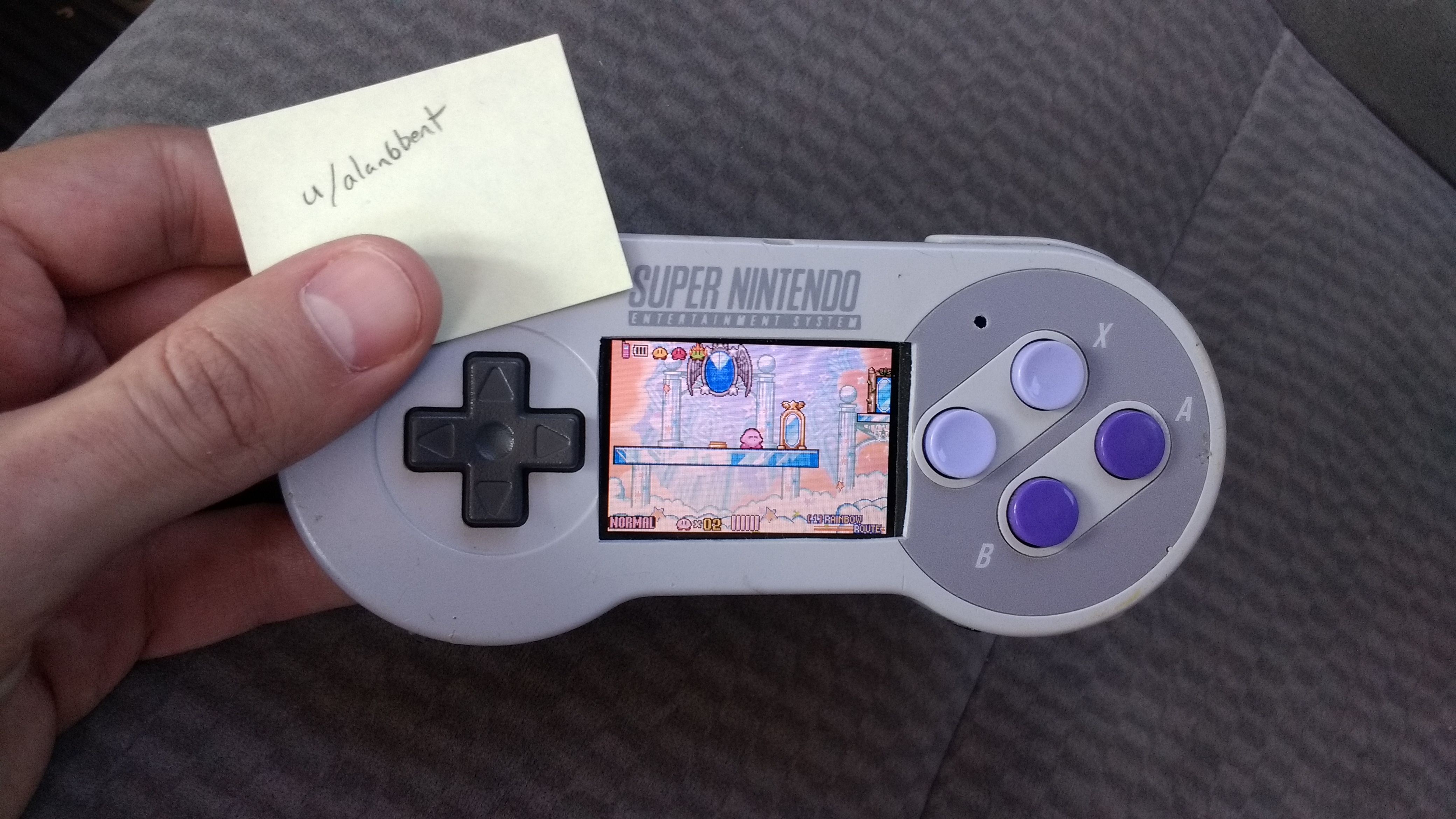 The hole next to the X button is where the speaker is. I like this thing a lot, but that hole for the screen isn't even remotely rectangular. And looking at this picture, the screen looks a little skewed. I've always been bad at cutting straight lines out of plastic. Definitely something I need to figure out for future projects. There's also nothing protecting the screen, maybe I could use some peel-off film for it. But anyway, there it is.

Edit: whoops, looks like I attached that last pic twice? For your viewing pleasure.

Last edited: Sep 27, 2018
You must log in or register to reply here.
Menu
Log in
Register
Top