The DowN64p Kit Headed to MGC 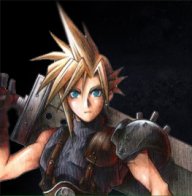 What's up everyone! Been a very long time since I've made any kind of project log, but seems this is a special occasion I wanted to share what I'll be bringing with me to the Midwest Gaming Classic for the BitBuilt Experience. This will be my first time ever going to a conference like this and I'm very excited about it!

So anyway, I realize the N64p has little place in the modding community anymore.Or at least not as big as it once was. But, for the past almost 5 years now I've been working off and on with an idea to make something I wish I had had when first started to make portables and that is simply, a Kit and reasonably easy to follow Guide on how to put it together. This as we all know though is not a simple task, hence it taking the better part of 5 years to come up with a tested design and making the custom components specifically for that design.

That said though, I think we're finally ready to reveal a Beta version at MGC that would give those with interest an idea of what they can expect to receive from the raw kit, and what it could look like with some extra elbow grease when it comes to paintwork and general finishing. 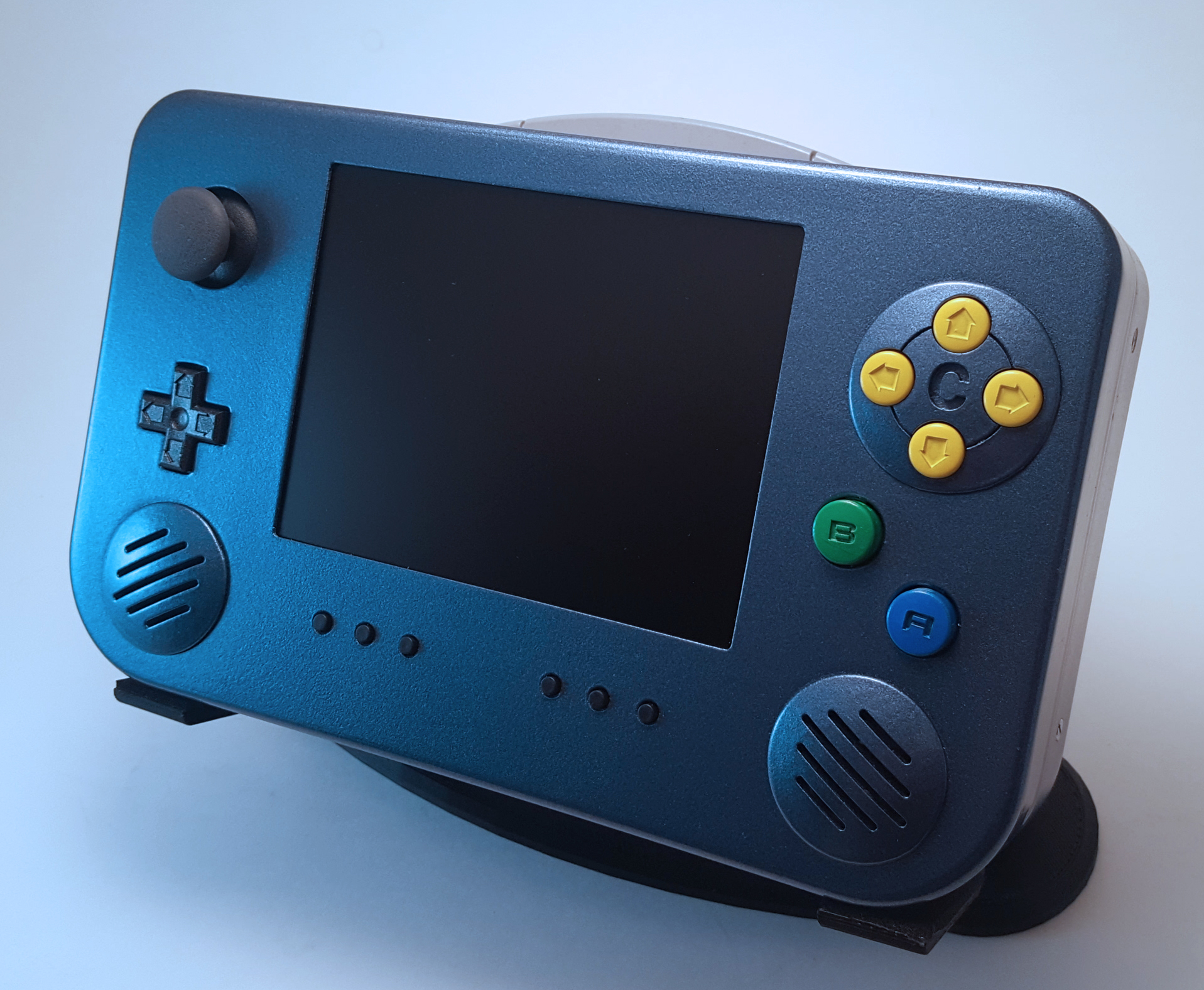 My first project I've ever actually "water sanded" which is going to be a process I use from now on. I was quite happy with how the final finish came out and felt. 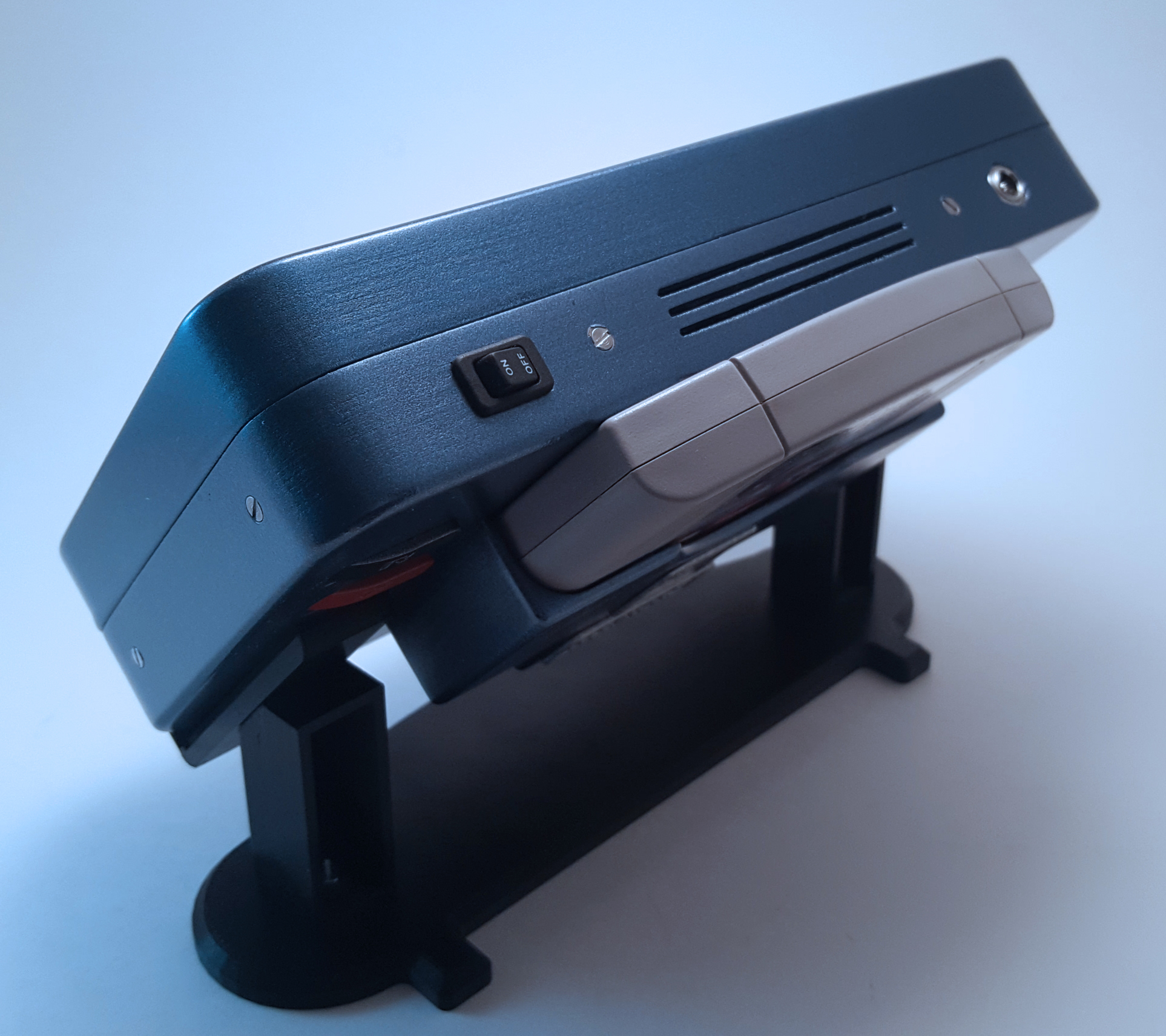 I also designed and 3D printed a stand for the system which was made up of 5 parts all bolted together. 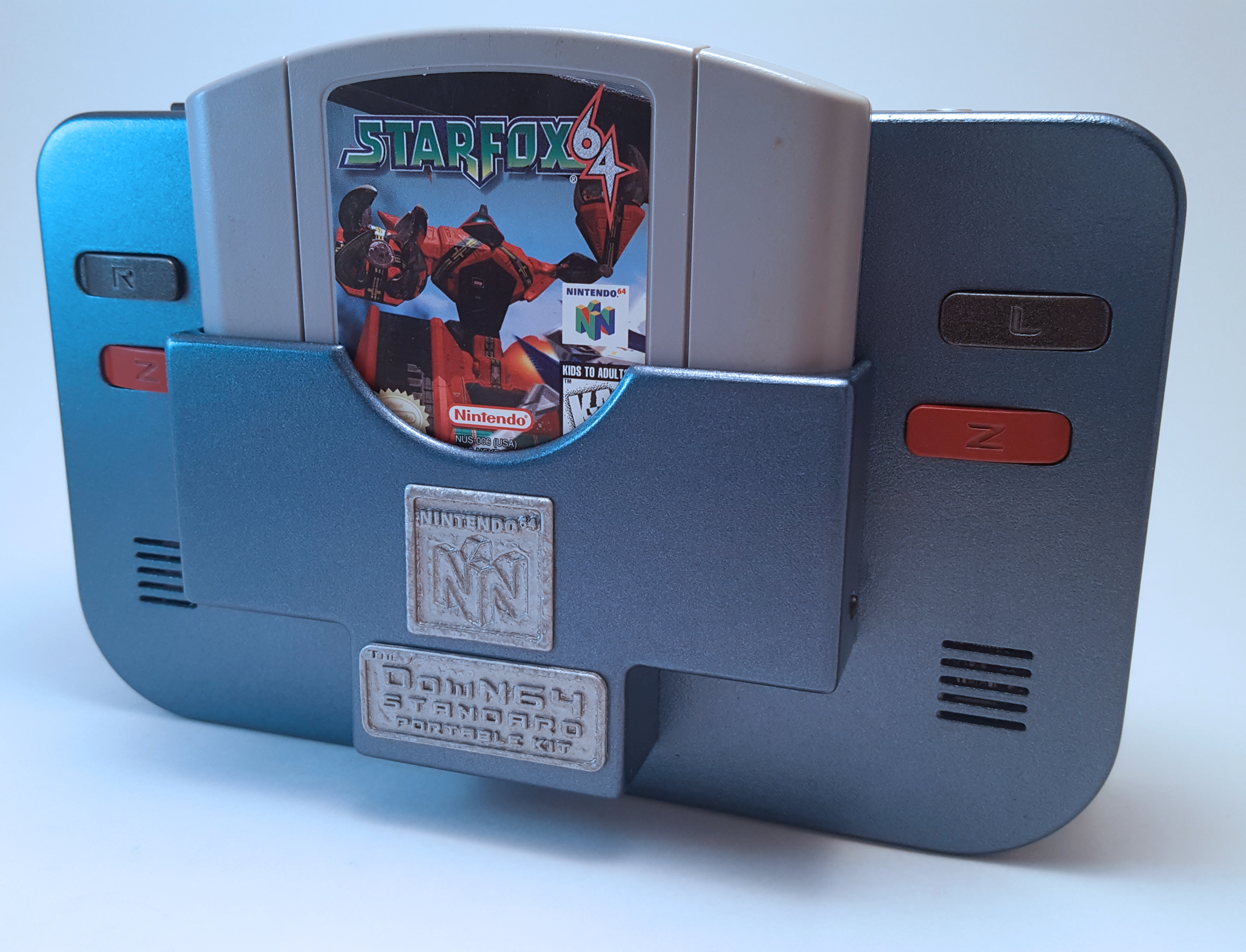 The decals on the back took a fatal hit with the clear coat though. Not sure why, but the textured paint I used to make the SLA decals look like Pewter did not take the clear coat well at all. I'd never seen that reaction in paint before so I'll have to look into different options in the future.

And a few of the big updates. A single power jack, a SPST switch and instead of having the vent SLA printed and then set in place, filled, sanded and painted, I just 3D printed it into the Back Face Bracket. These changes were a direct result of the new charger board that now allows you to use any 12V 3A power source to charge the batteries while playing off wall power.

And the bottom with the custom switchable headphone jack. Also I bought a bunch of tamper evident holographic stickers from Amazon...that's another story though.

Oh yeah, and it actually works.

And the finished internals all wired up and ready to go. Without the need to wire up a memory card or having the screen's tact button board, I had to actually put foam padding on the batteries to take up the extra space. May be able to make these a bit thinner now. Wiring is decently clean but secure.

The big part of the display is the 3D Printed Exploded Display which would show those interested how the layout and components are supposed to line up. Granted this was built using mostly spare/rejected parts it's not quite as clean as what will be shipped with the kits but it get's the main idea across. The video explains the details of the display and I'd love to do a full write up on that alone, but unfortunately don't have the time. So here are just a couple pics to supplement.

The Front Face Plate bare as it can be. 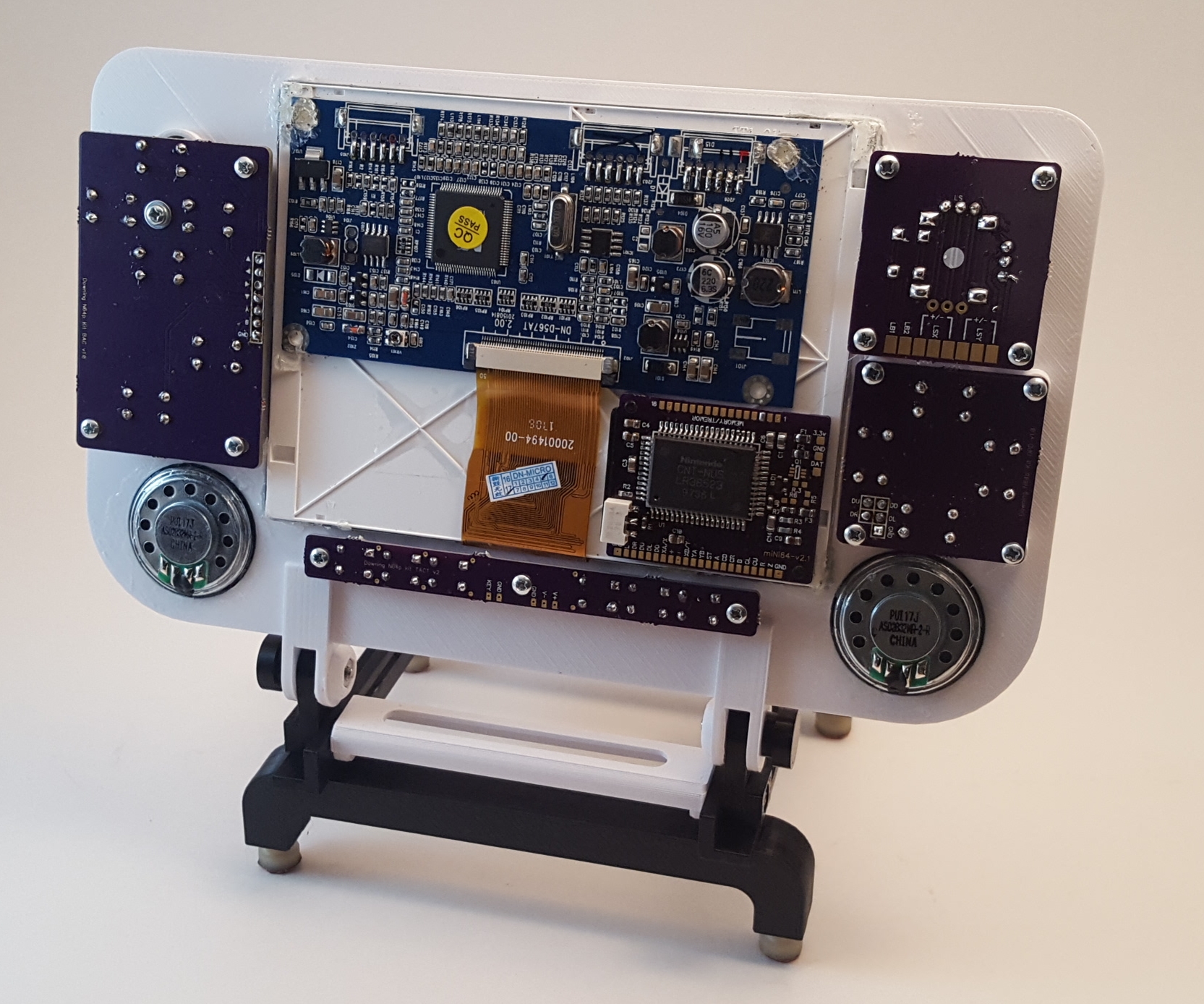 And what makes it tick on the back. Now this isn't the actual screen PCB that will be sent, nor is the controller board the same. As I said, these were spare/rejected or even outdated parts that I had laying around to make this, but the idea is still there.

But yeah, I'm very excited to see if this is well received when next weekend get here. Hope you enjoyed!
Last edited: Apr 8, 2018

Downing said:
My first project I've ever actually "water sanded" which is not going to be a process I use from now on. I was quite happy with how the final finish came out and felt.
Click to expand...

( ͡° ͜ʖ ͡°) ?
"I've been cranking it to Marshall's work for the better part of a decade. I have no intentions of stopping anytime soon." -bud

Yeah...sometimes I hate you. hahaha. I've been up since 4:30am tending to insane children of my own making. I'm allowed a grammar mistake or 100.

10/10. I regret not being able to go to MGC to see these in person.
"If you think a hot dog is a sandwich, then you're an idiot" - GingerOfOz, Sage of our era

These look great! They'll be a big attraction at the show for sure.

Downing said:
Not sure why, but the textured paint I used to make the SLA decals look like Pewter did not take the clear coat well at all.
Click to expand...

Looks more like a weathered bronze plaque. But, you know, silver. *cough* feature!

Looks great! I know that portablizing kits has been something that comes up from time to time, so nice to see someone with the experience and gear step forward to meet the demand.
The sun is shining...

As nice as this is I'm strongly against the mass production of portables. Kit form or otherwise. Individual custom components, sure. But we don't need little timmy on every other block hacking up the limited supply of N64's. This is detrimental to the long term sustainability of a niche hobby. And don't get me started on the ethics of turning a crowd sourced hobby into a wallet lining scheme.

bud said:
As nice as this is I'm strongly against the mass production of portables. Kit form or otherwise. Individual custom components, sure. But we don't need little timmy on every other block hacking up the limited supply of N64's. This is detrimental to the long term sustainability of a niche hobby. And don't get me started on the ethics of turning a crowd sourced hobby into a wallet lining scheme.

Thanks Bud, much appreciated! And while I get what you're saying about drying up the N64 supply, there may be a misunderstanding of the scale here as this is not going to be something little Timmy is going to pick up on a whim at Wal-Mart or buy without a deep commitment to actually finish the system.

These are still going to have to sell at a pretty high price point due to all the custom components and build time it takes to make them. So to start out we're looking at $550 a kit and that doesn't even include the N64 itself which the customer would have to source on their own. (Yes, there is a laundry list of good reasons for this).

Now of course depending on how much interest there is, the price point may go down a bit as I could outsource the audio amp, controller and screen tact board so those wouldn't have to be populated by hand (mostly anyway), but still right off the bat this is in no way going to be a general consumer product. Only those who really want to learn or already have the skill set are even going to consider it which wipes out a majority of the market.

What I'm hoping to offer here is exactly what I feel would have been instrumental in my learning experiences when I was a novice. Granted you learn more by failing and trying again is a point I'm not going to argue, but for a novice having something they can see works and has guidance may give them the confidence to start up the project and we get a new hobbyist on board. And for someone experienced who is less likely to screw up probably wouldn't fail much to begin with and now can build a portable that much quicker.

I'm 100% with you on sustaining the niche but the catch 22 is that sustaining the hobby also promotes consumption of everything it needs to keep it going. These kits are not going to accelerate or stop that process to any noticeable degree and if I do up 25 I'll have considered it a personal success and start work on the next project.

But bottom line, I'm still going to be producing these in my basement and I only have so much time and production resources so therefore can only produce so many. I won't be making bank on it either, just enough to buy more supplies, pay the electric bill or get another printer to keep up with an increased demand on print time. And pretty much ever dollar I've made from this hobby and commissions has gone right back into the Basement which has allowed me to grow to this point.

But like I said, I've got zero idea of the actual interest factor this idea is going to have with other makers so it may die before it even gets off the ground. We'll see what happens next week!

Designed and had printed up a hundred rack cards with/perf for the table.

Don't anticipate a great deal from it but if anything else will be a flashy business card.

Getting pretty excited for Friday!

-----
Please Check Out My Site and Subscribe
Also this is where my Case Making Guide can be found!
You must log in or register to reply here.
Menu
Log in
Register
Top