A present for my brother

Since my brother doesn't do the hobby electronics stuff, I feel it's pretty safe to post a spoiler/worklog of his present here without actually spoiling it for him. Also, this forum needs some appreciation!

My brother has been talking about starting a small collection of arcade games when he graduates from college and gets a place, so I thought I'd help him out with that. Basically, my goal is to build a slightly stripped down supergun + controls so he can start with his arcade collection hobby before he gets the space he needs for full cabinets.

So far, I've gotten most of the parts in (the rest should come on Monday).

I got two of these sanwa sticks (same kind of stick you'd find in a MvC or MK cabinet).

I got this connector (jamma) which is common among many arcade boards so he can swap different boards into this thing as he gets new games. The connector is a little confused though, it's a Japanese layout, sold by an American company, and labeled in Chinese... dawat

The game I intended to include, bought it because they claimed it worked, but when I got it, I realized they were trying to scam me when it didn't work, too bad for them, they did it on eBay, got my money back and don't have to send it back. I bought another, which should come in on Monday, I hope that one works -.-

Hopefully not fried video converter, I had it hooked up to the first board before I realized it was broken, so I may have to replace some chips... It is supposed to convert the RGBS to composite (it's 320x240, so composite is high enough quality).

And finally, my plans for the controllers. Boxes made of wood, top surface will have a black abrasion resistant coating, and the sides of the boxes will be painted blue for player 1 and red for player 2. Will have removable bottoms to access the restriction plates for the joysticks.

Very cool! Can't wait to see it done!
If you want to support the development of my projects, consider becoming one of my patrons: https://www.patreon.com/aureliomannara.

Started assembly of the boxes, will take parts out, use wood filler in the cracks, sand, and paint. Also, no worries on space inside, there's even more than I originally accounted for (I was originally planning on using 3/4 wood, but I ended up with 1/2 to save on weight). 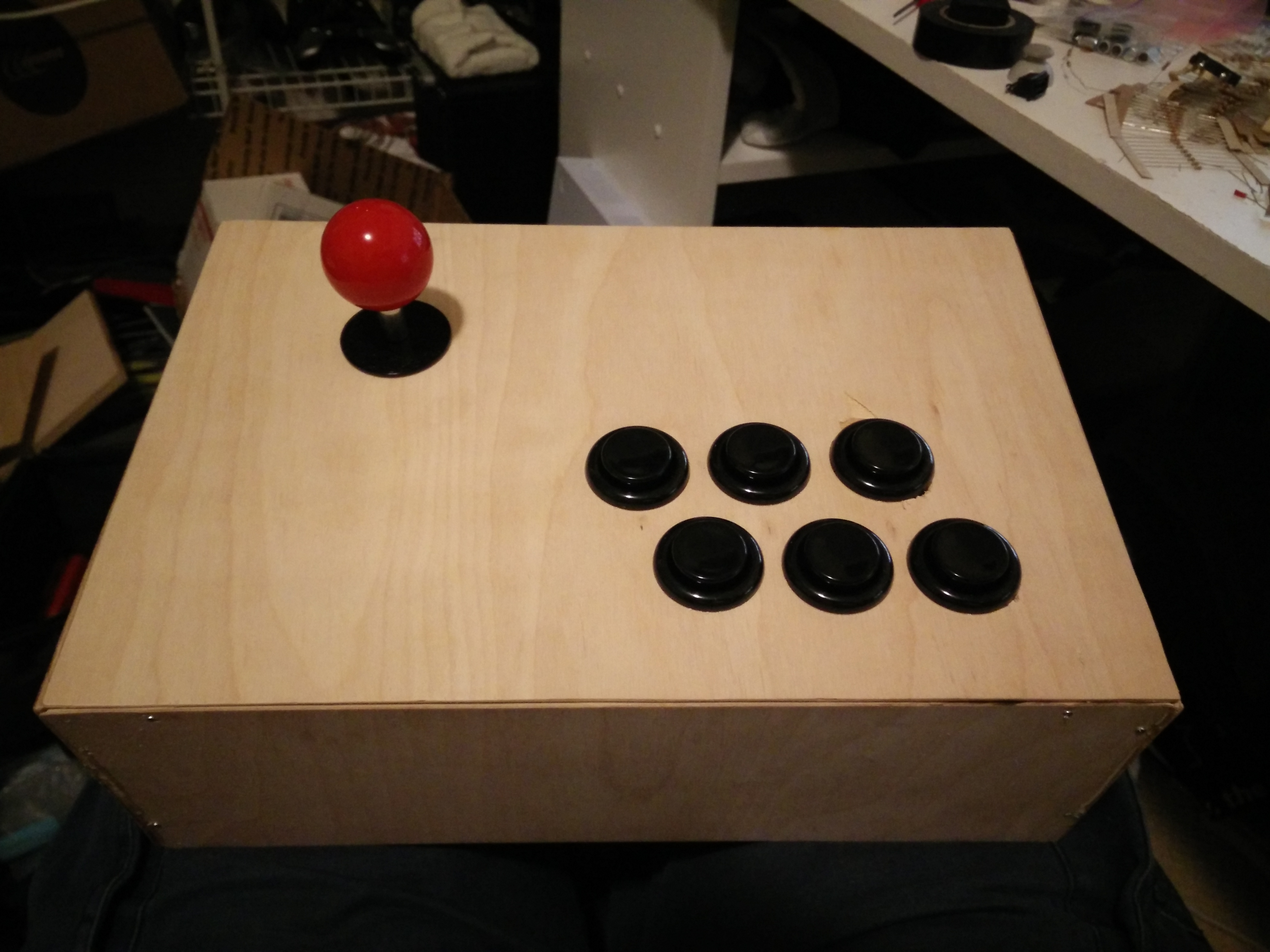 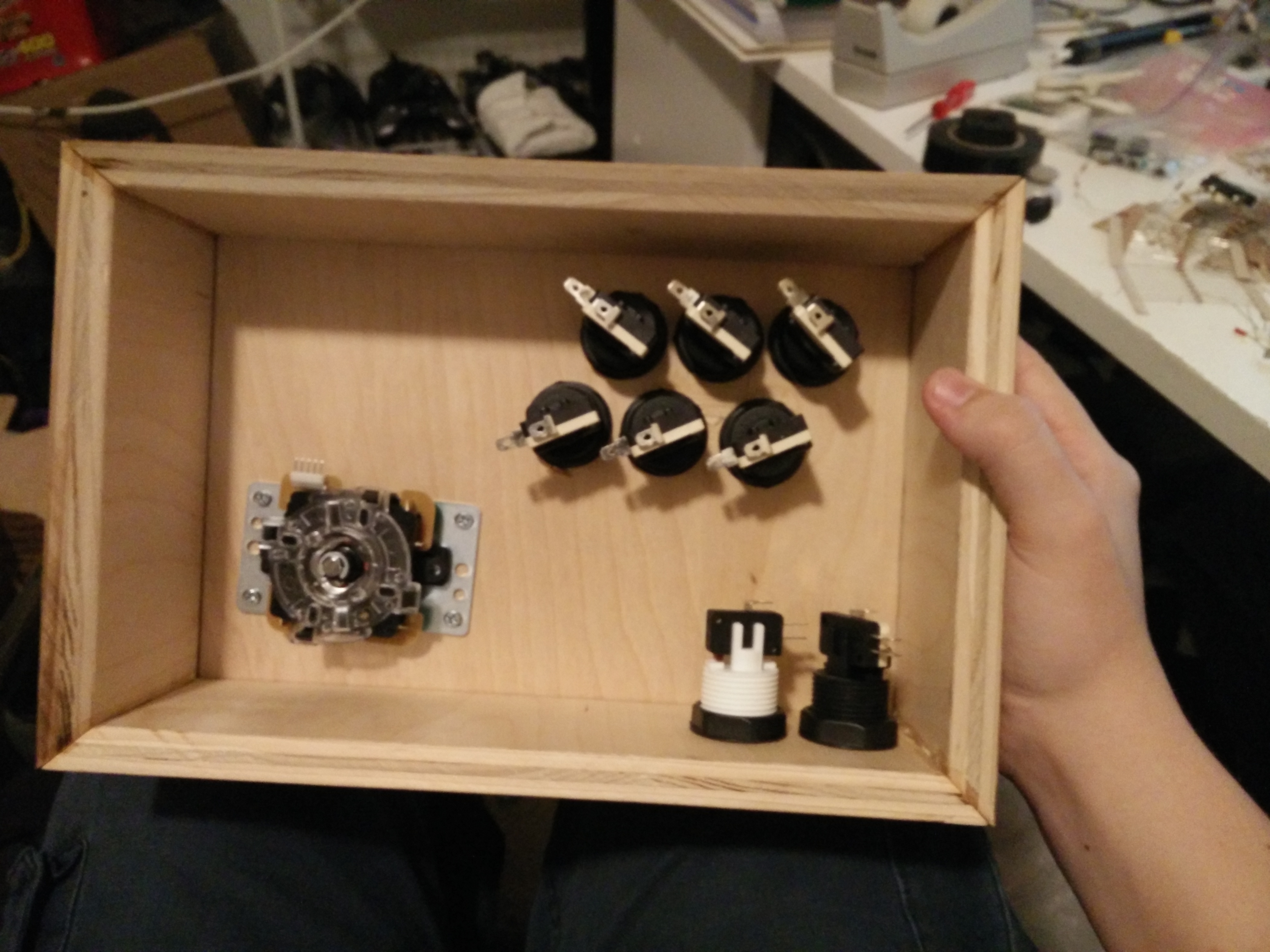 EDIT: quick update, I got a new board in, hooked it up, no video at first, but the board seemed to work. Grabbed a scope and one signal was the opposite polarity I expected (expected negative pulses, had positive ones). Did a quick swap of the wires to invert the polarity and it worked! Never been more happy to get video out of a board. It's a little shakey at the moment, but something is easier to work with compared to nothing. 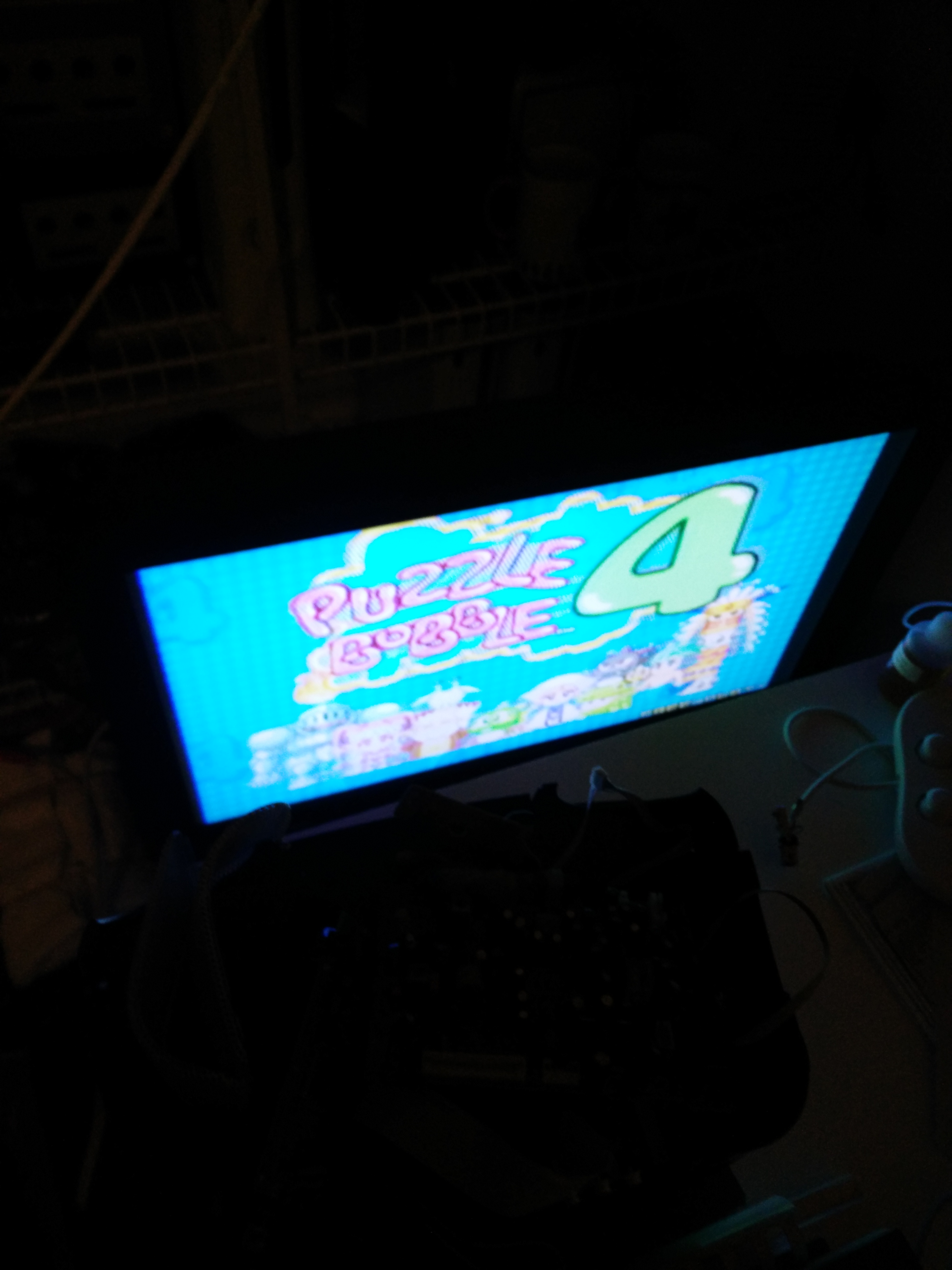 Finished assembly, painted tops of boxes, and installed some parts. Waiting on the blue ball top for the red box's stick. Also changed my mind about the color scheme, gonna have the boxes all one color. Gonna finish up the controller circuitry and test it all out. 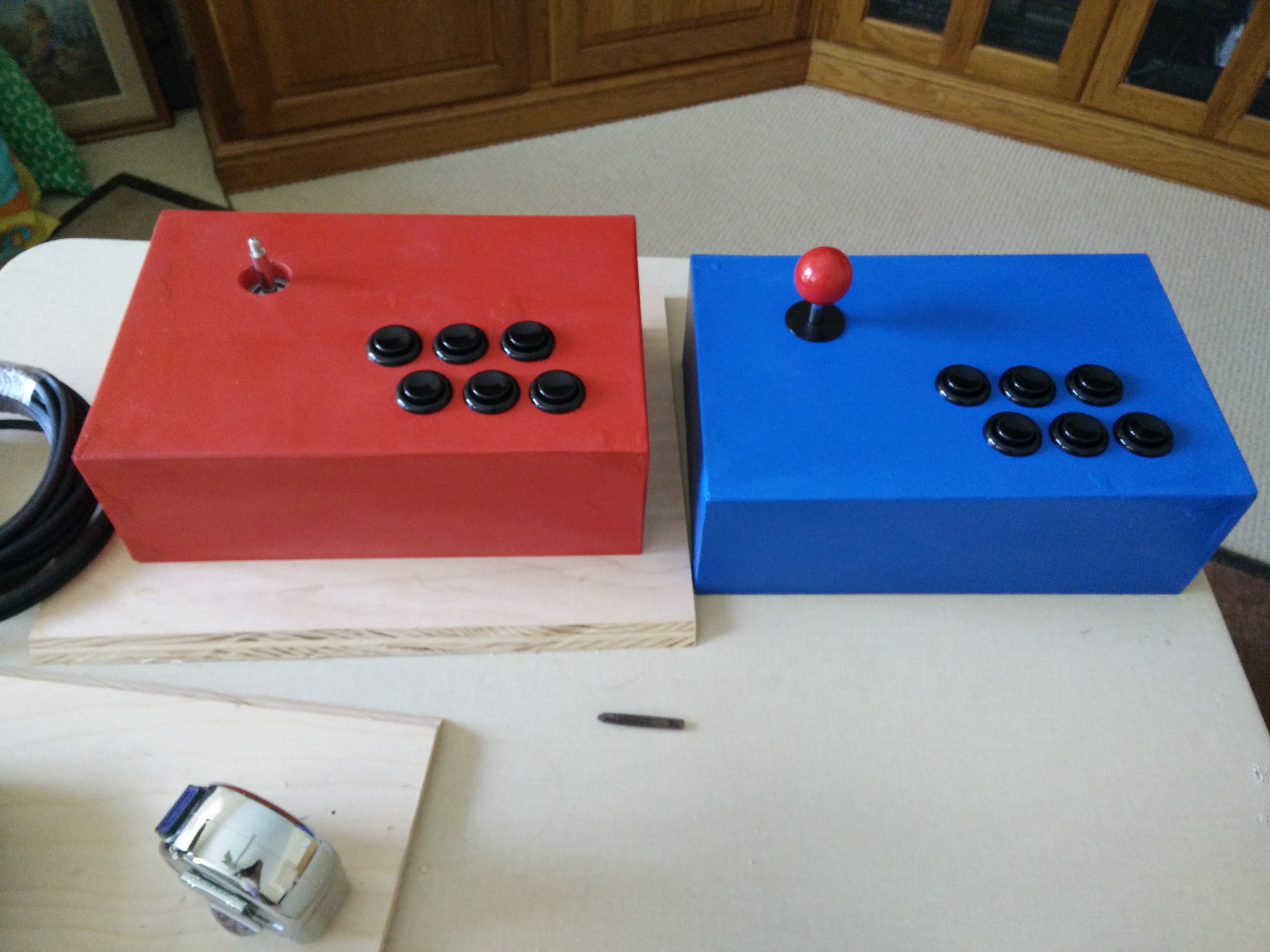 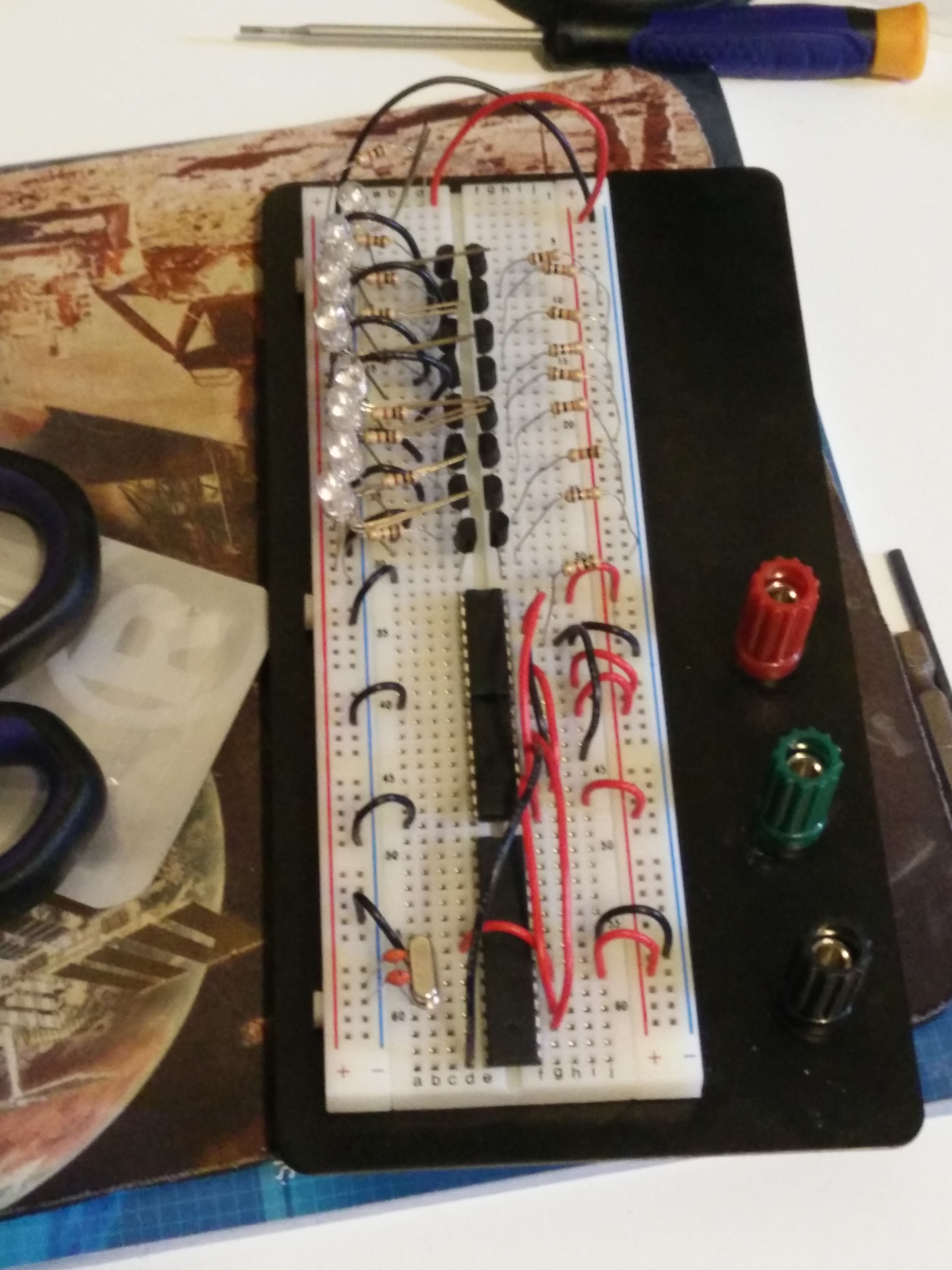 Finalized the controller circuitry and assembled two identical boards. Trying to decide how to connect the cord to the board (that's easily detachable and will provide some strain relief), thinking something like this. Started work on the main connection box thingy that will connect it all together (and house some circuitry as well). Hoping to finish by Sunday. 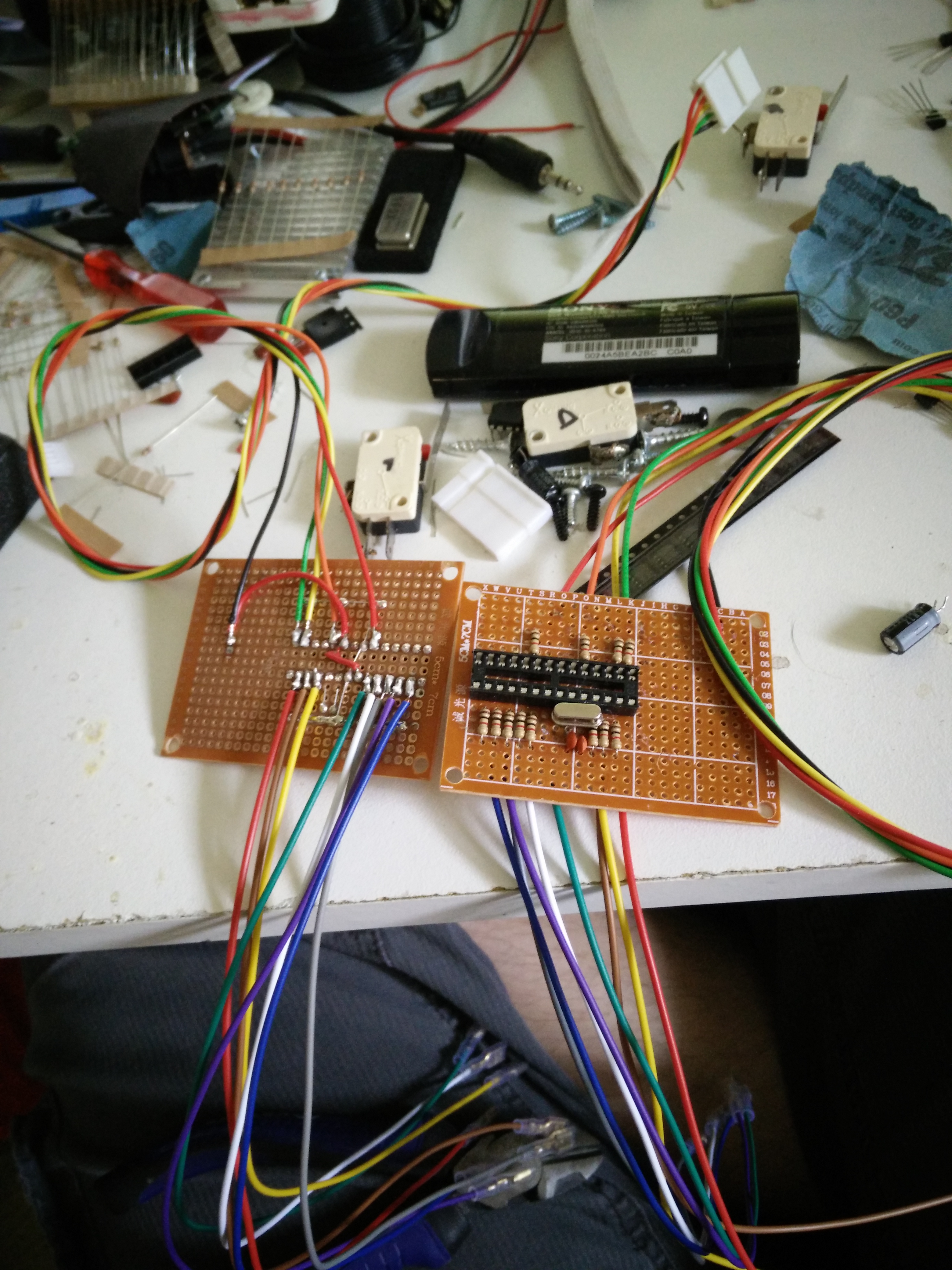 Almost done, everything except for audio and the second controller is wired, tested, and working. Looks like a big box of wires at the moment, but it does all fit and close just fine. Not sure how I'm gonna do audio just yet, the isolation transformer I got has a 38:1 ratio when I was shooting for a 10:1... Any suggestions? It's a pretty small transformer, so I don't think I can take out some windings to change the ratio. 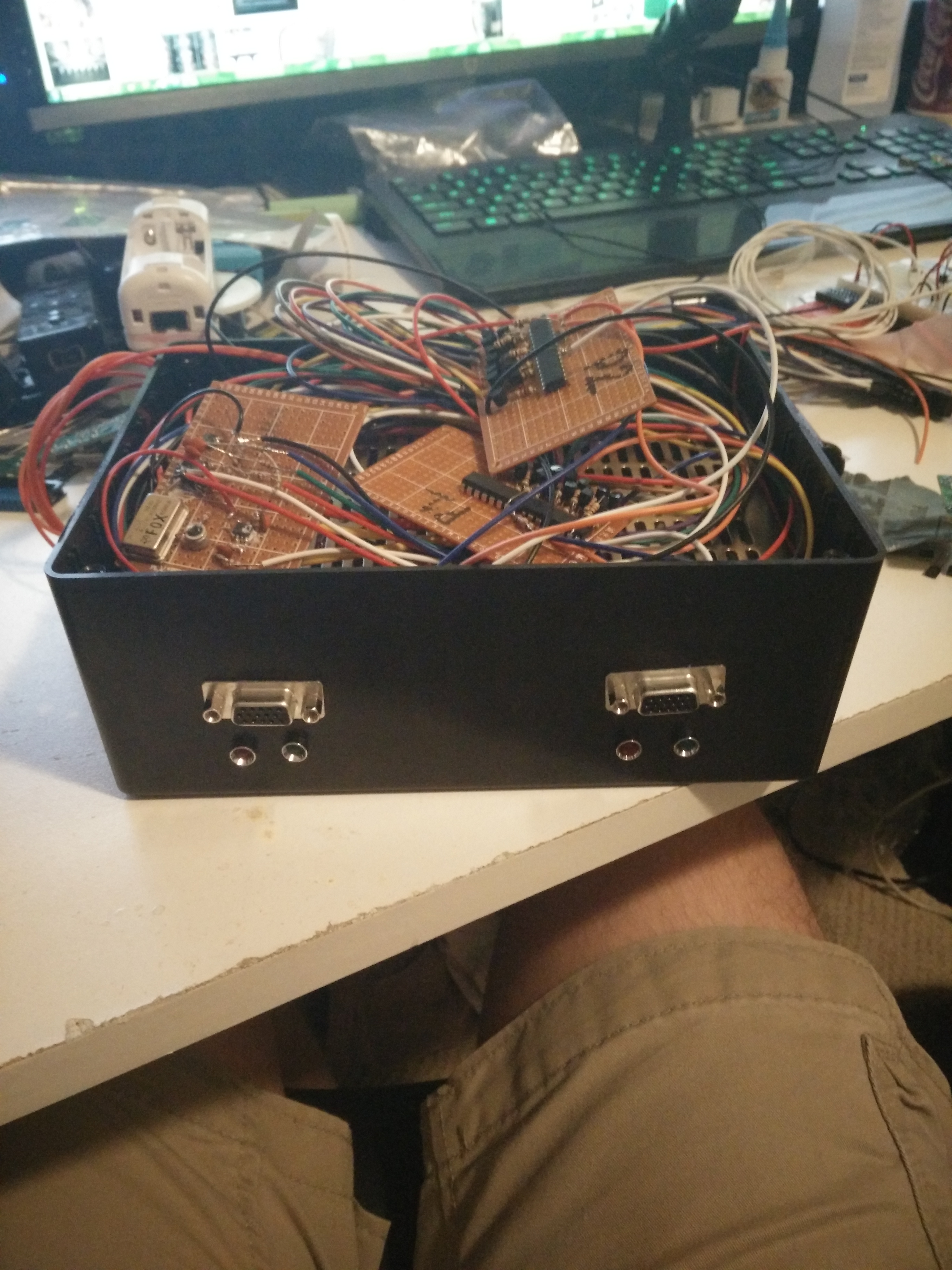 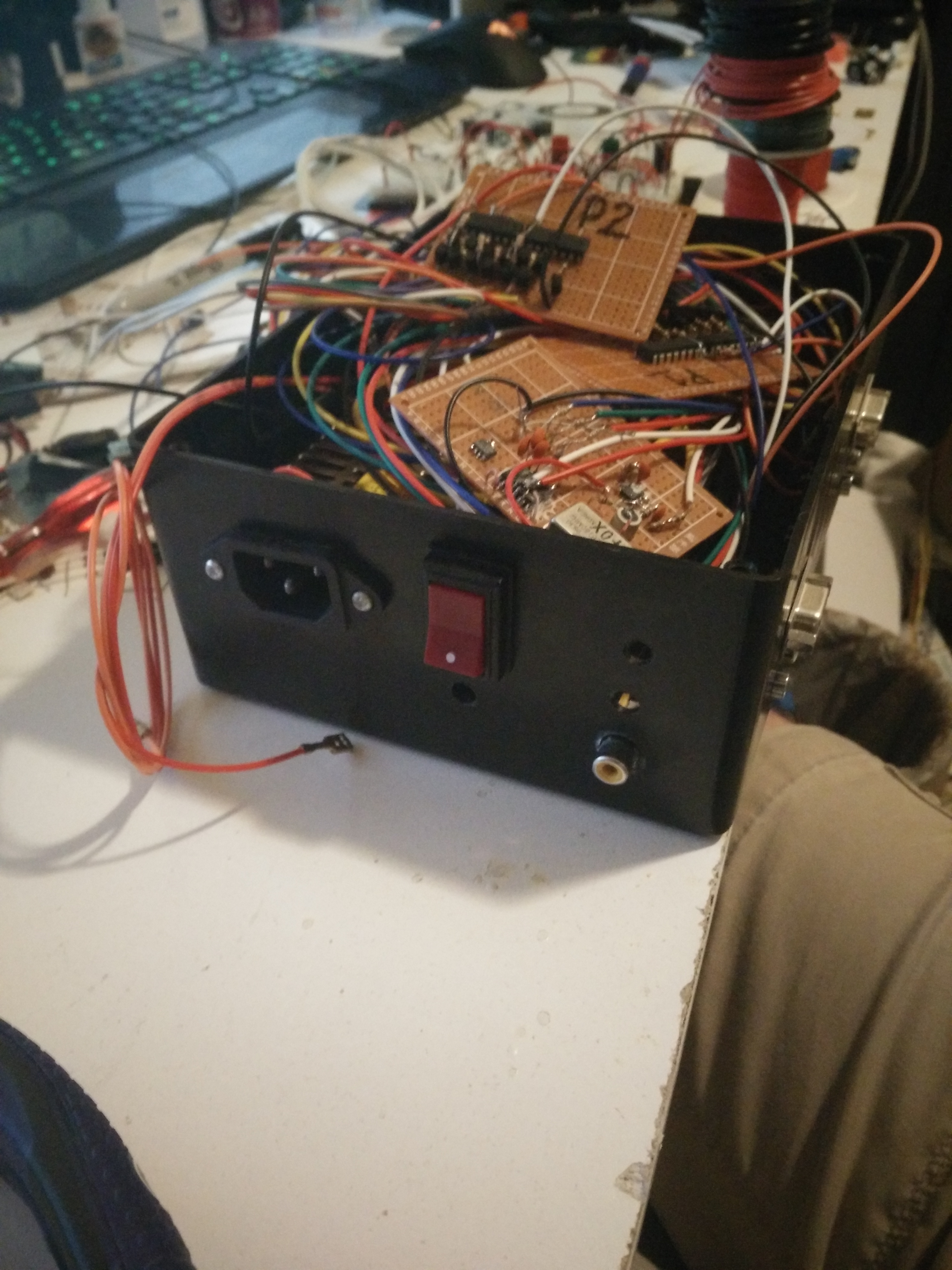 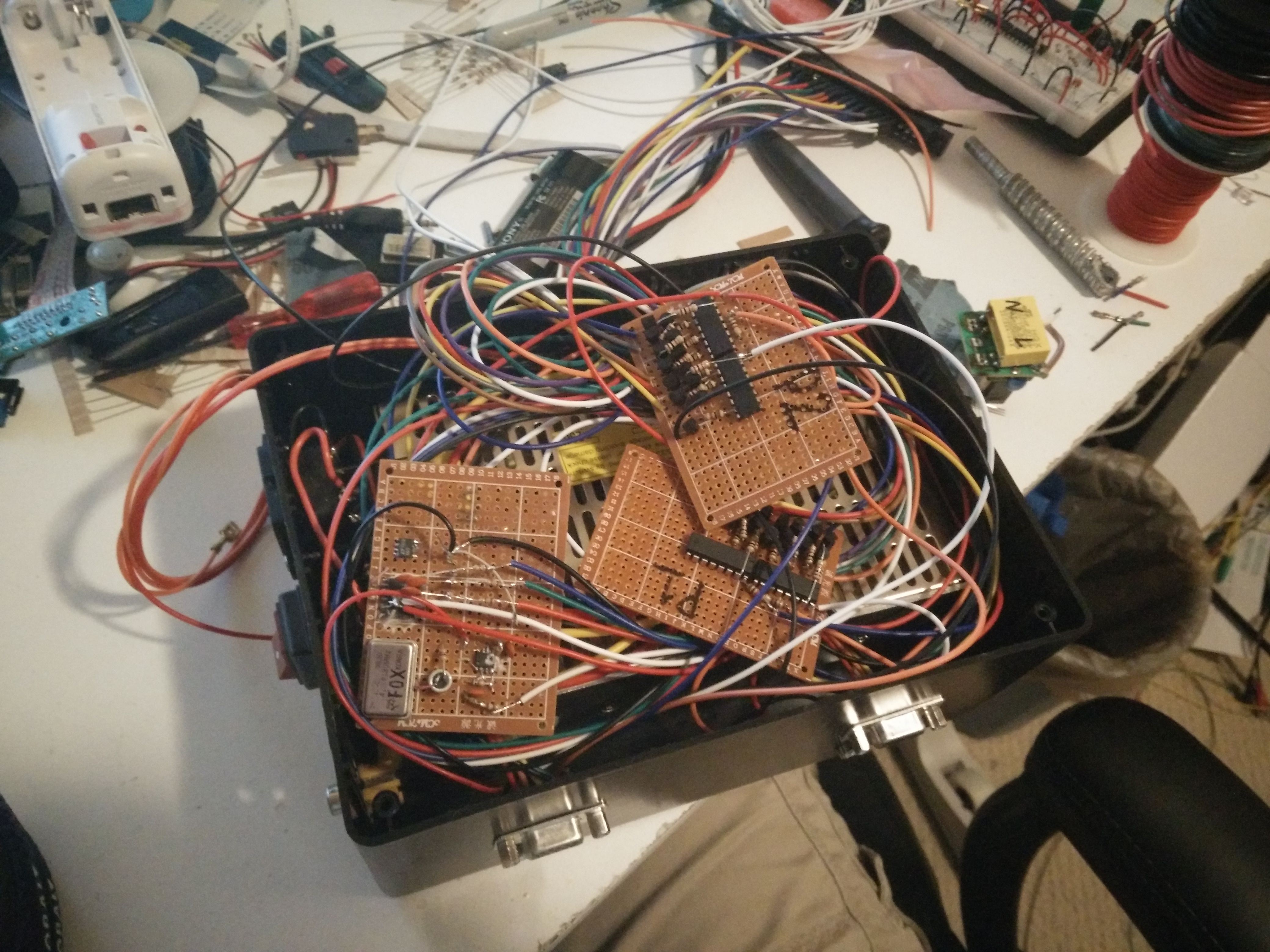 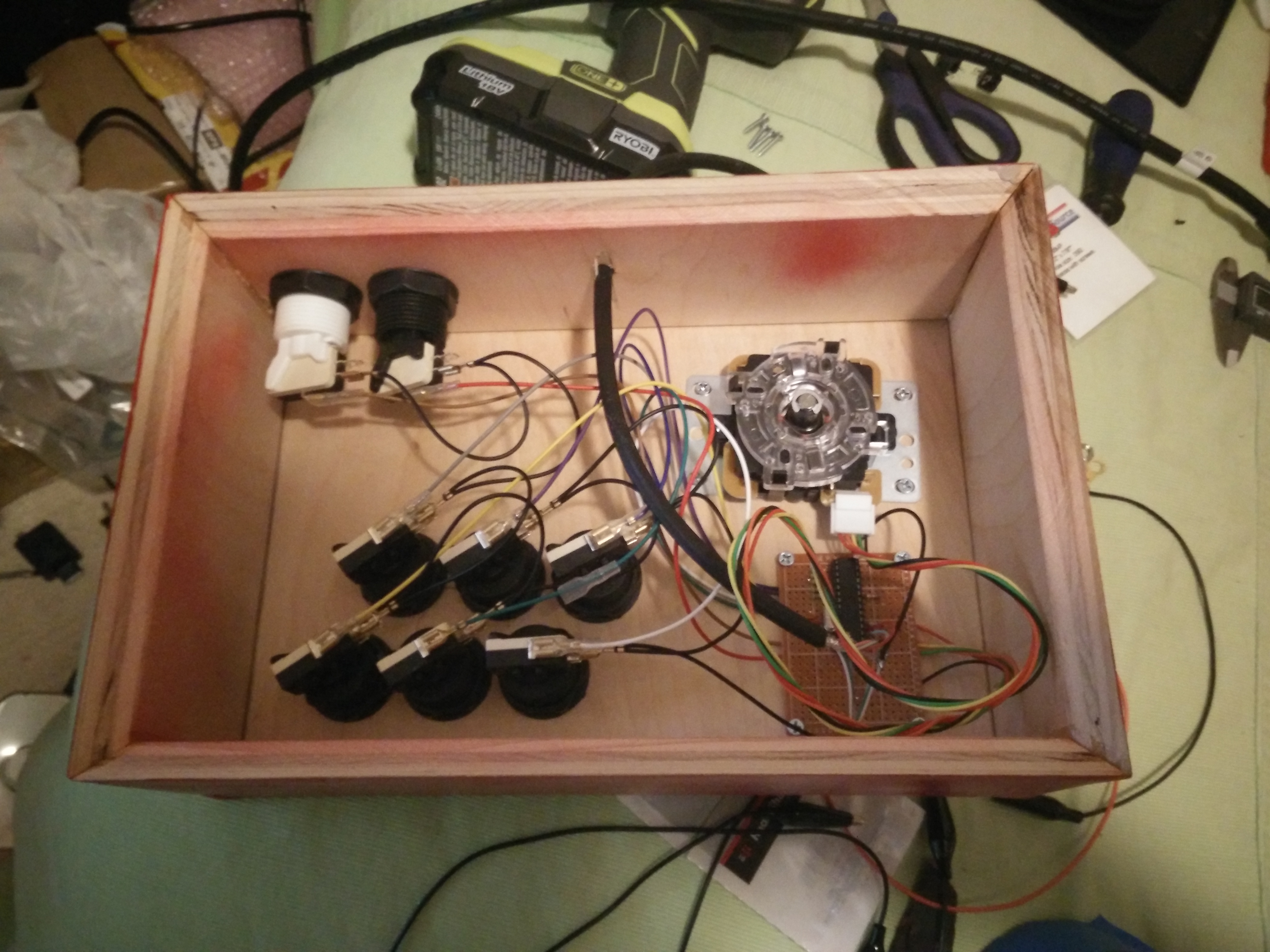 Finished it up woot woot, gave it to him and he likes it. Will make post in cutting edge
Final guts 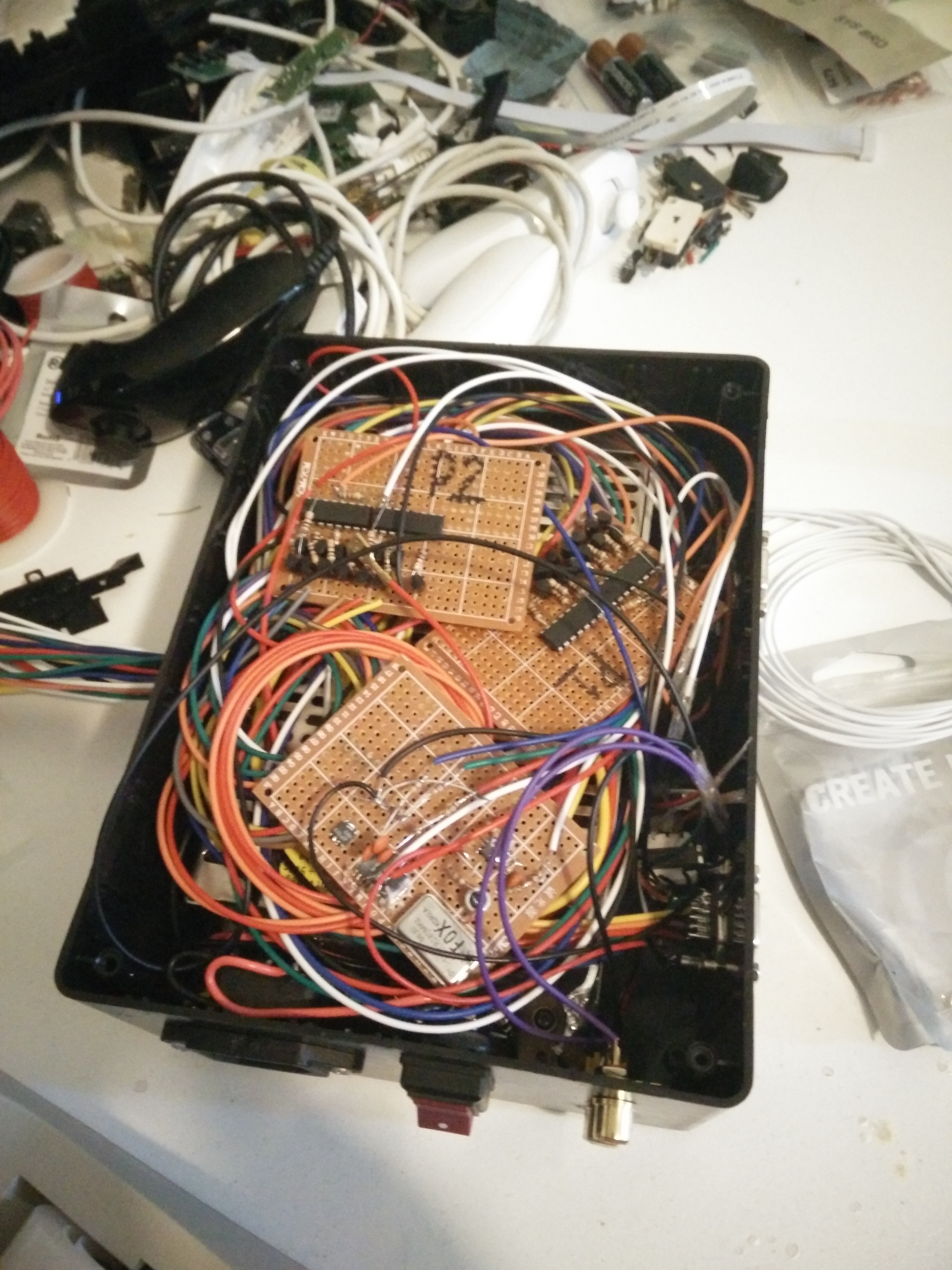 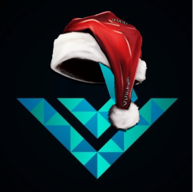 Nice! Cabinet work is beyond me so I have a healthy appreciation for MAME cabinet makers and the like. Id love to see a vid of these in action! 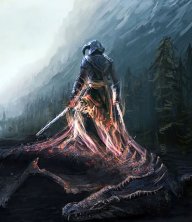 Dont bump old threads. Read all the BitBuilt rules. We have them there for a reason.

MasterNate said:
Dont bump old threads. Read all the BitBuilt rules. We have them there for a reason.
Click to expand...

Eh, it's fine here since this is the most recent topic... Maybe we can get more discussion in this section 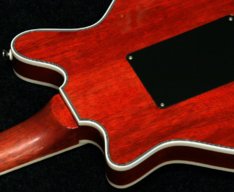 MasterNate said:
Dont bump old threads. Read all the BitBuilt rules. We have them there for a reason.
Click to expand...

I didn’t either
If you want to support the development of my projects, consider becoming one of my patrons: https://www.patreon.com/aureliomannara.

I have found my people

idk, this is wikia right?
The cake is a lie

NahuelFlores said:
idk, this is wikia right?
Click to expand...

As it turns out there are rules. This was posted 2 years ago, don't bump old threads.
GCC+ | Wii Micro | Portable #1 | Portable #2

cheese has a brother?

Doom said:
cheese has a brother?
Click to expand... 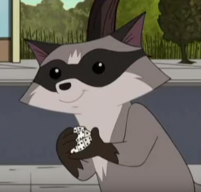 That's the joke.
You must log in or register to reply here.
Menu
Log in
Register
Top