Worklog Combining all my consoles into one case 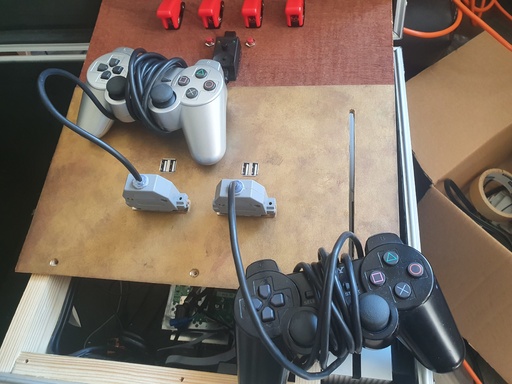 I am new to this forum and a bit intimidated by all the awesome projects I've seen so far, but I'm very excited to share my work in progress!

This project was born through a frustration I had, having to keep moving around cables and consoles whenever I got fed up with a certain console. Besides, my TV in the living room does not support the older consoles and most of the HDMI convertors I've used have either a huge delay or terrible image quality.

So, I decided that I wanted to build all my consoles into one housing, having only one power plug and one HDMI output. The consoles I have are a Nintendo 64, a Nintendo GameCube, a Sony Playstation 2 and a Microsoft Xbox One S. I will be modding the first three so that they can run off mass storage devices, the Xbox one S will remain standard (and easily removable from the case, in case I want to bring it on lets say a business trip).

I wanted to build everything into a custom flight case but these we're a little more expensive then I hoped, so I went for a cheap standard size flight case. This thing turned out to be huge, but I decided to roll with it anyway, using half the space for storing stuff like games and controllers. 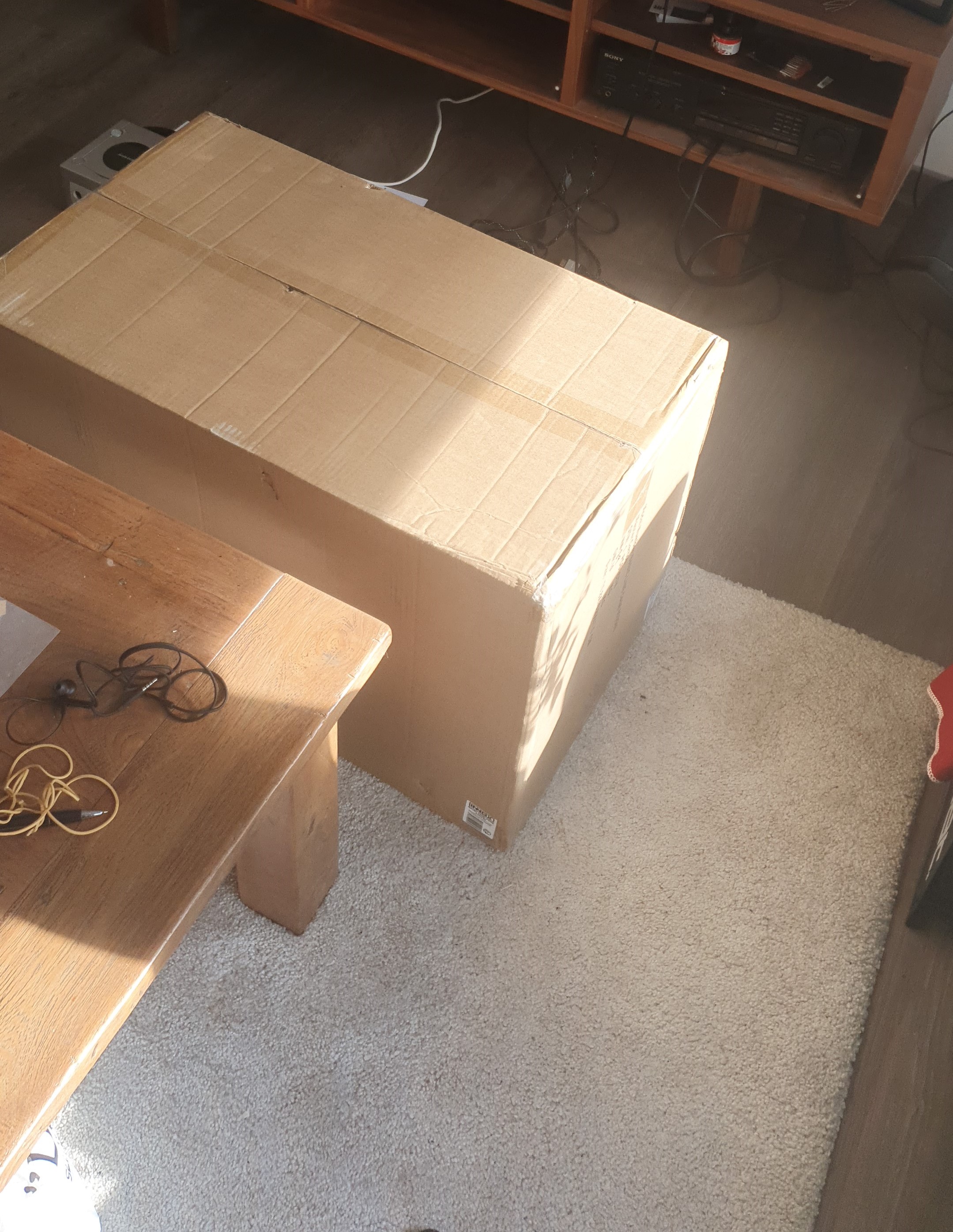 Pic below for size comparison. I ended up using the left half for storage and the right half for the electronics.

I started with the Xbox One, as I still wanted the Disc drive to be accessible. Because of this I was limited to a certain orientation. I decided to mount it all the way to the right of the case. Below the console is a piece of wood that acts as a spacer for all the cables to connect. On the sides theres some space to allow for airflow. The Xbox is held in place with some foam and can easily be removed in case I want to take it with me somewhere. 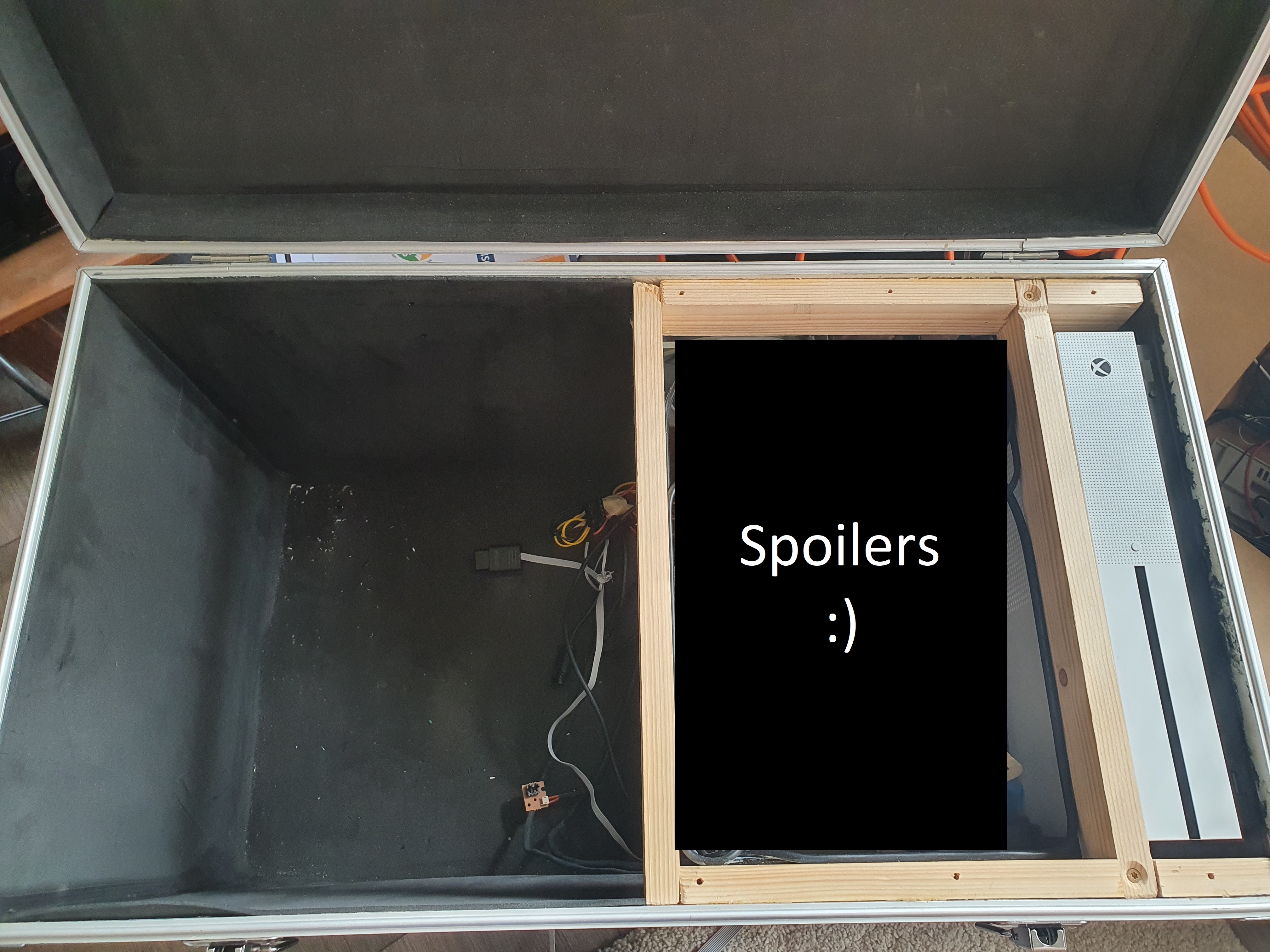 Now for the control panel.... I wanted to use a nicely coloured sheet of hardwood but I thought this would be too bland and boring on its own. I talked with a buddy and he suggested I used a brass plate at the bottom, giving the control panel a two tone look. I really liked his idea and this is what i ended up with. 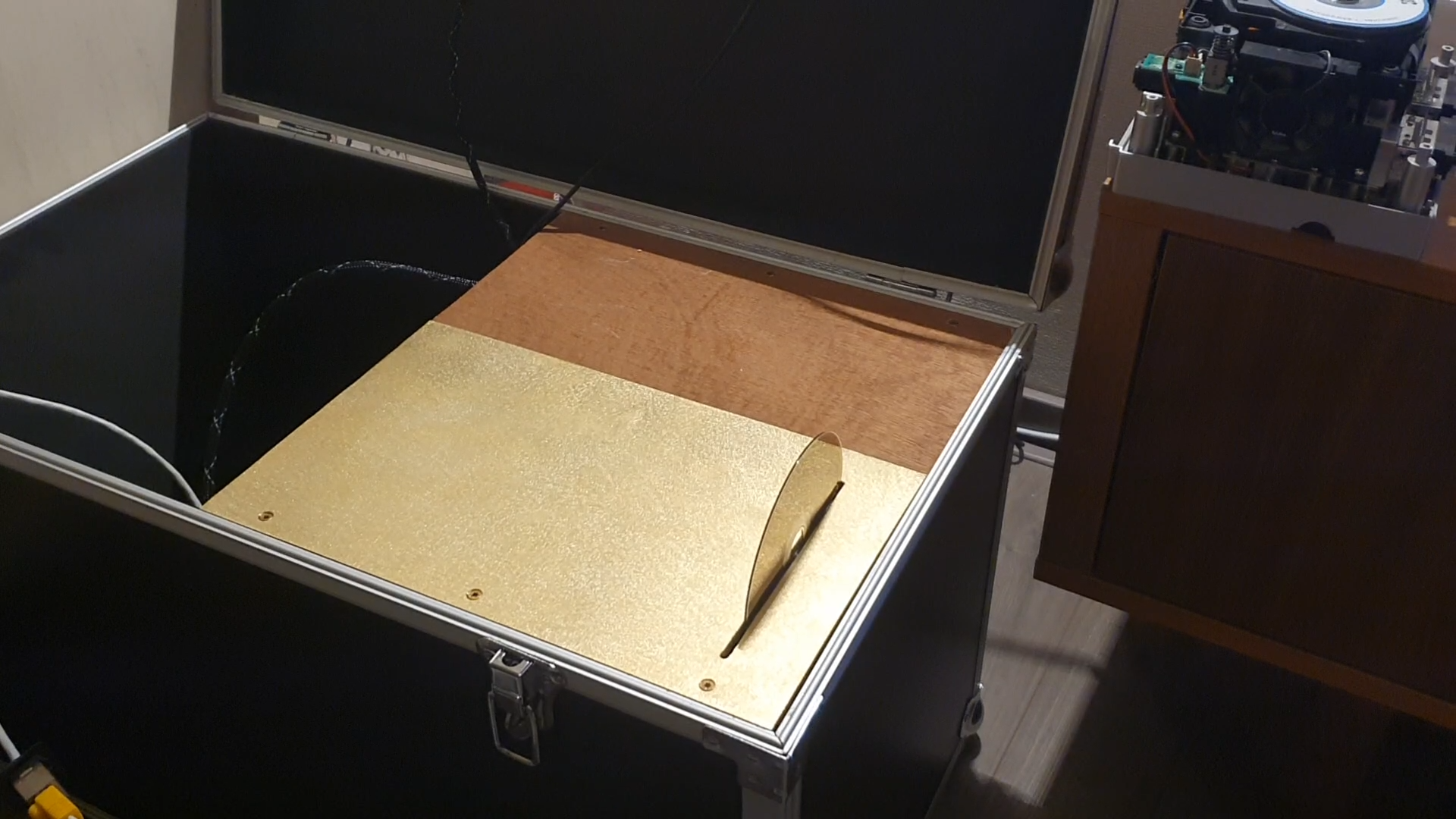 We gave the brass plate a brushed finish and imo it looks great! We made a slot for the disc drive and and i started brainstorming on how i wanted the control panels layout to be like.

The pic below is the '''finished'' control panel. The brass plate tarnished pretty quickly when working with it, but I do kinda like this look. Opinions are welcome!

- The red flip switches control the main power of each console, from left to right: N64, NGC, PS2, Xbox one.
- The small push switch on the left is to turn on the NGC's disc drive (just to boot a game from SD-card, keeping the disc drive/laser off after launch) and the one on the right is to turn on/reset the PS2.
- Below it is a fan controller that connects to 2 140mm Noctua fans. They are also connected to a PCB that regulates fan speed depending on internal temperature, this can be turned on/off with the push switch below the potentiometer.
- On the brass plate are 4 USB ports. 2 are for the PS2 and 2 are for the Xbox.
- 2 25pin connectors, which are soldered to the N64, NGC and PS2 consoles controller ports. This allows me to play with 2 players on all 4 consoles with only 2 controller ports

- In the top right corner is an IR-led which can be used to remotely switch between HDMI channels, allowing for only 1 HDMI output for all the consoles. 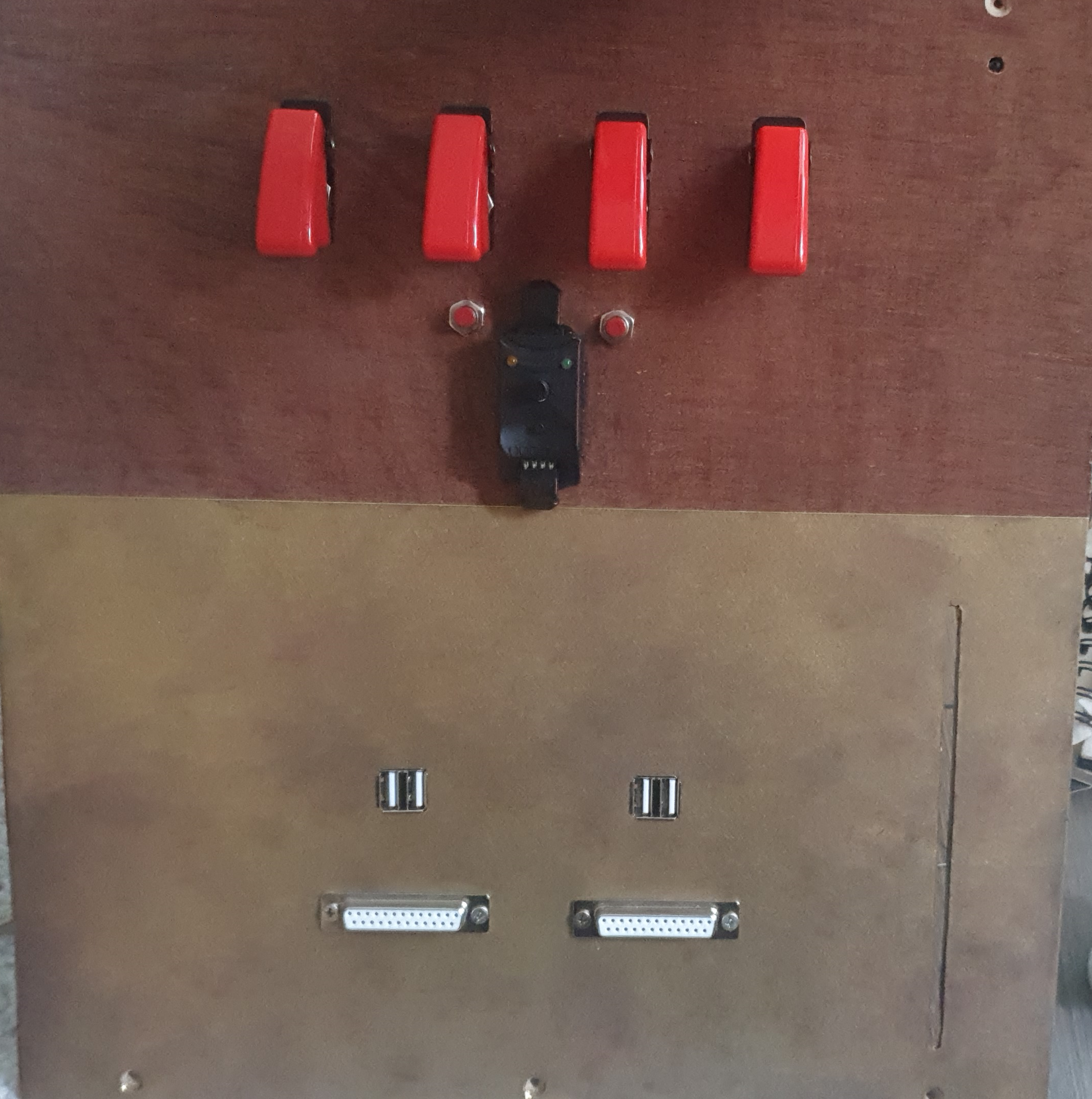 The Nintendo64 has an Everdrive installed, the NGC has a Xeno modchip and micro SD-card adapter installed and the PS2 has a Modbo chip installed and is now, with a little work, able to boot games off USB sticks. Apart from longer loading times, this runs surprisingly smooth (provided the USB is good quality).

Disclaimer: I am an avid collector and only have games that I actually own on the storage devices.

Some more random pics below:

I'm planning to make my own connector housings for the controllers, but thats gonna be a later project 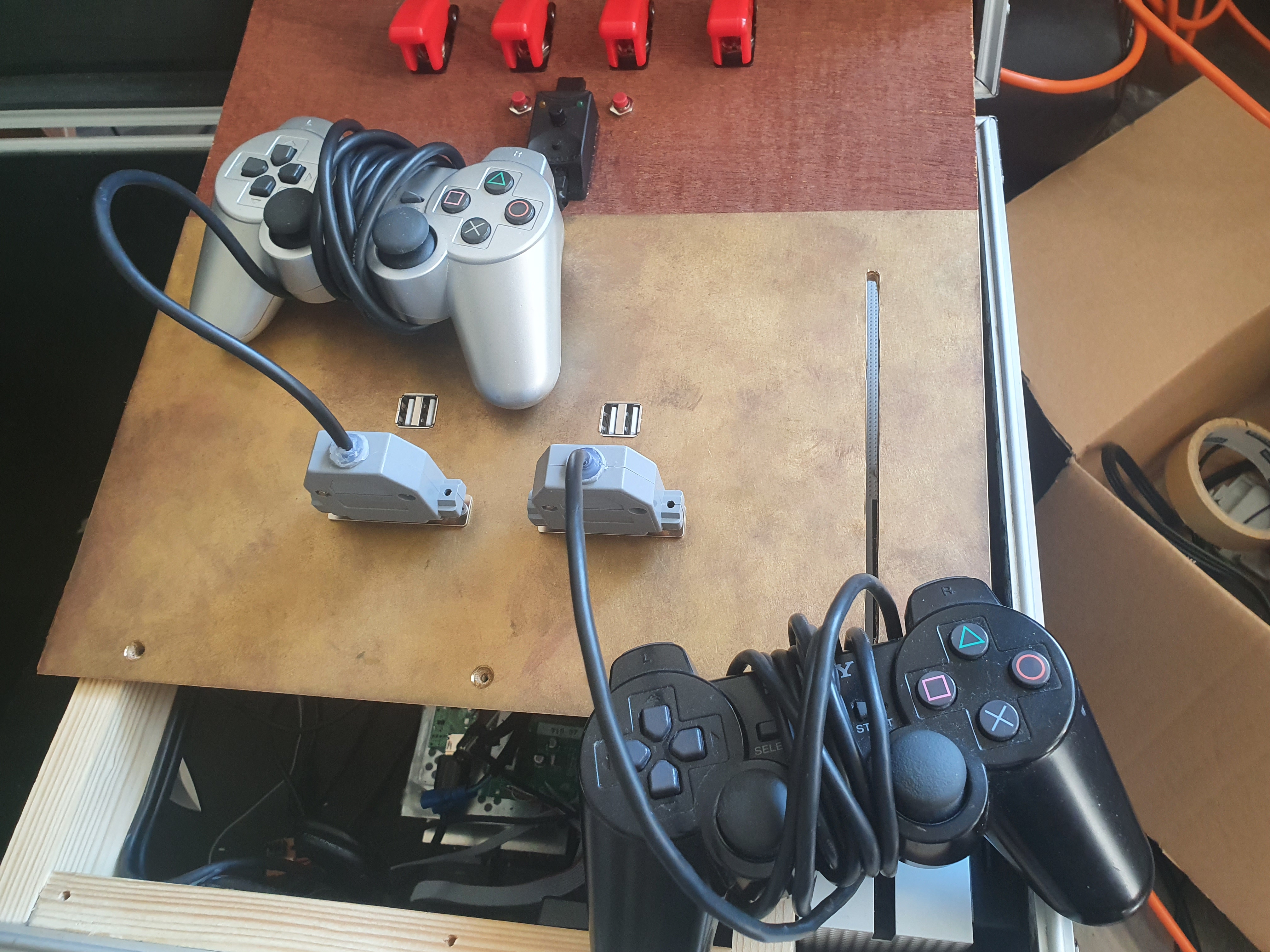 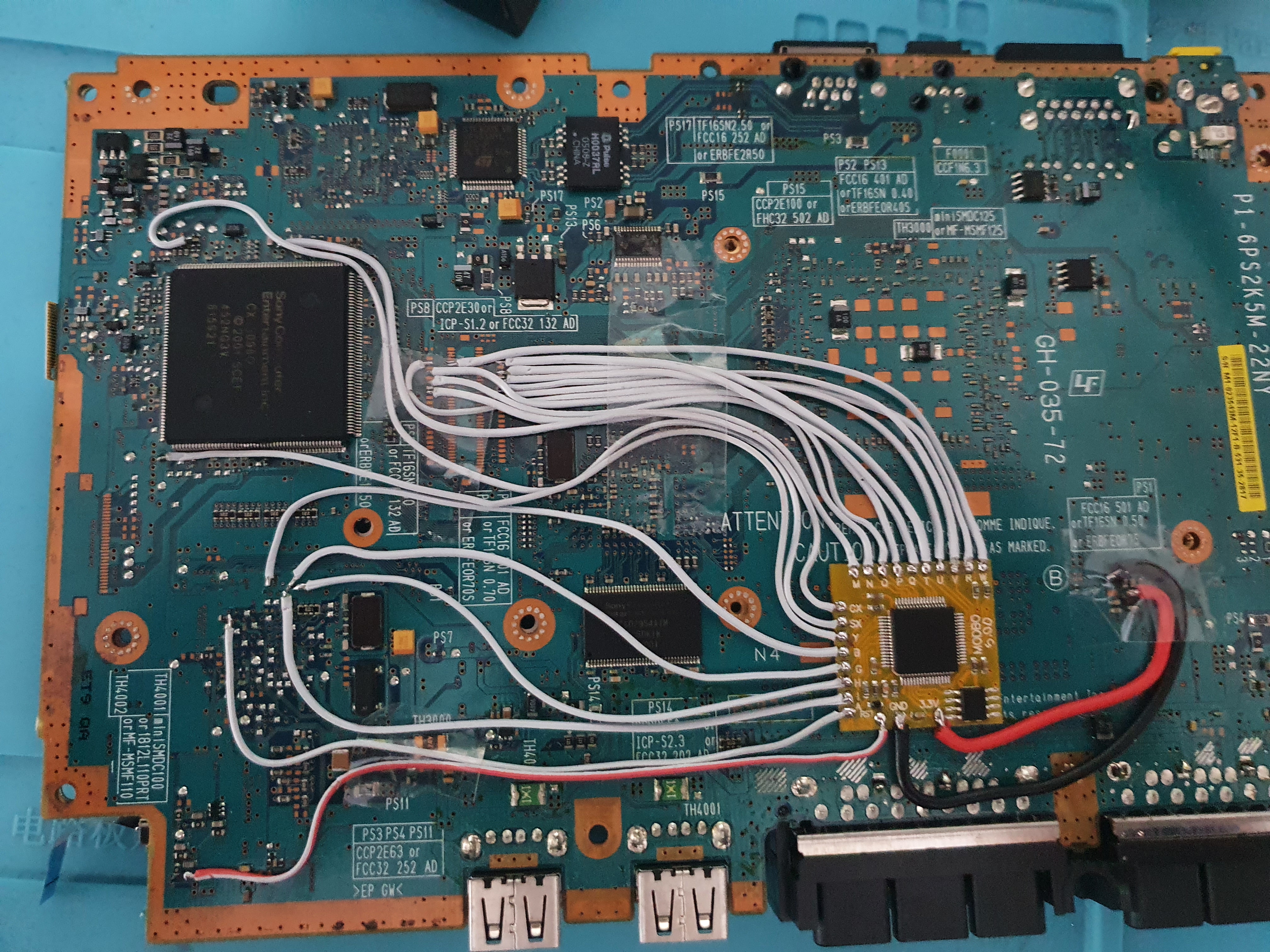 Spend quite some time writing this, will give a later update on the guts of this thing!

- What finish should I give the control panel? I am planning to add some logo's somewhere on the wooden part to distinguish which switch controls which console.
- What should I name this thing?
Last edited: Aug 14, 2022